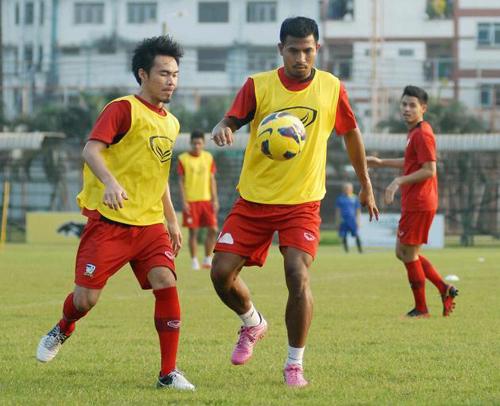 PHUKET: Thailand will aim to gain the upper hand over old foes Singapore in the first leg of the ASEAN Championship final today, in a showdown of the tournament’s two most successful sides.

Both have won the title three times, with their second championship showdown in five years set to decide which side takes the record as the region’s top dog.

Despite being the most successful teams in the tournament now known as the Suzuki Cup, they have both failed to reach the final in the past two years, which saw first Vietnam then Malaysia claim debut titles.

Thailand’s last triumph came a decade ago, though their last appearance in the final ended in a bitter 3-2 aggregate loss to Singapore in 2007 that put the city state level on titles.

Having seen off defending champions Malaysia in the semifinals with a 3-1 aggregate win, the Thai team are widely tipped to end their decade-long wait for a fourth title. Thailand coach Winfried Schaefer has, however, refused to accept the tag of favorites.

“I don’t think we are favorites,” the German told media on the eve of the match at the tiny, less than10,000 capacity Jalan Besar stadium.

“We have two matches in the final – one game here and one in Bangkok. Our focus right now is on tomorrow’s game and then after that, we can talk about our game in Bangkok.

“It is a small stadium and Singapore have good players. We have to concentrate from the first to the 90th minute and we have to be focused, fight for the ball and keep the play in front of us.”

The 62-year-old German admitted that he was surprised at his team’s strong run of four wins from five, given Thailand’s lack of preparations in comparison with their tournament rivals.

“I am happy that we are in the final now. I was not sure on November 1 when we had our first training session.

“If you look at the preparation time we had for the tournament, I think it is a surprise that we are here now. We didn’t have any friendly matches, only our training camp to prepare for the tournament and now we are in the first leg of the final.

“Thanks to the players and the staff for getting us here, but we are not finished yet, because we want to win the AFF Suzuki Cup.

“We worked very hard and focused in the past six weeks and I must compliment my team and my staff and all who helped us during this intense time,” said the veteran coach, who took over the national post last year.

Turning his focus on the Singaporeans, Schaefer said the formidable striking pair of Aleksandar Duric and Shahril Ishak was likely to present an even greater challenge than the Malaysian attack.

“I think that the best two teams in the tournament are in the final. I watched Singapore’s last matches on DVD and they played very well, so it will not be easy for us tomorrow. I think that we have to play the match at a high level and concentrate and hope that we can get a good result to take home for the second leg in Bangkok.

“Singapore have a very good team. They have a good fighting spirit and they are now in the final, and nobody goes to the final without good play.”