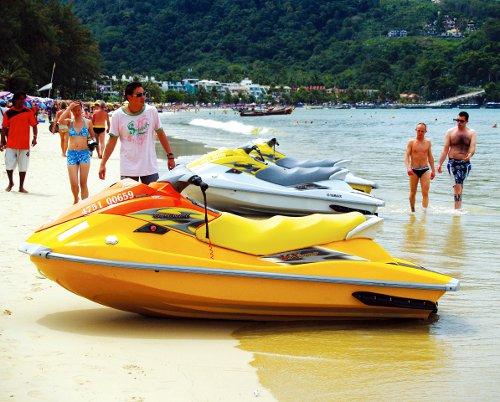 PHUKET: The British Ambassador to Thailand, Mark Kent, has joined a campaign by Thailand’s Ministry of Tourism to tackle tourist scams and will be in Phuket in the new year to discuss the issue with high-ranking Phuket officials.

Ambassador Kent is being featured in a nationwide television campaign that will run until the end of December.

In the video, Ambassador Kent and Deputy Prime Minister Chumpol Silpa-archa, who is also the Tourism and Sports minister, appeal to Thais to “be good hosts to foreign tourists”.

The video shows tourists with foreign children walking along busy beaches, playing in the water next to speedboats and prominently features jet-skis.

“Each year more than 850,000 British nationals visit Thailand. We at the [British] Embassy here would like to make sure that they travel safely, receive a warm welcome and have a good time here,” said Amb Kent.

“The consular team at the embassy is here to help and we also work with the Thai government to make this happen.” he added.

The Thailand Authority of Thailand on its website urged tourists to take responsibility for their own personal security while travelling overseas and use the same common sense and sound judgment when abroad as they would at home.

“It’s easy to let your guard down when on holiday, especially in a country like Thailand where the residents are friendly and the atmosphere is relaxed,” said the report.

“Travellers are advised to be cautious in areas where incidents are more likely to occur. These include crowded markets, tourist sites and bus or train stations, and festivals. It is also best to avoid isolated neighborhoods, shortcuts, narrow alleys and poorly-lit streets, especially late at night.

“In secluded beach destinations and remote islands, independent travellers should exercise caution. They are advised to avoid all secluded areas and stay in the vicinity of other travellers whenever possible,” the report added.

“Phuket is one of the most popular tourist destinations in Thailand and every year thousands of British nationals visit its attractions. I will be visiting early next year to discuss issues affecting British residents and tourists,” Ambassador Kent told the Phuket Gazette.

“Most visitors have a good time free of trouble, but unfortunately there are some who have problems. We encourage British visitors to read the Foreign Commonwealth Office’s travel advice and ensure that they have adequate travel and health insurance before travelling,” he added.

Ambassador Kent urged travellers to declare any pre-existing health conditions and to read carefully the small print of travel insurance policies to ensure they are covered for all the activities they intend to do. For example, many policies do not cover riding a moped or motorbike, he noted.

“They should also watch out for scams, and consider carefully the risks of renting a jet-ski and should only do so from authorized, insured operators. We advise tourists not to hand over their passports when renting something – such as a jet-ski or motorbike – as on occasion we have seen passports not being returned to the owner when there has been a dispute about payment for alleged damage to the equipment hired,” Mr Kent said.

“We hope all those here enjoy their holidays and the festive season in Thailand. Bear in mind road safety issues though, and if you have been drinking alcohol, please do not drive yourself,” he added.

“In the event of an emergency the embassy and consular colleagues are there to help. Anyone who gets into difficulty should contact the embassy on 02-305 8333,” Amb Kent urged.