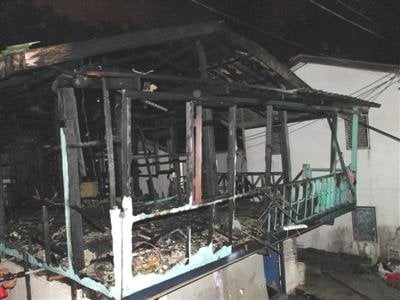 PHUKET: A Kalim man whose home burned to the ground early Sunday morning suspects the blaze was intentionally set by his son-in-law as an act of revenge.

Kathu Police Duty Inspector Jakkapong Luang-aon received a report of a fire on Phra Barami Road, Soi 6 in Kalim at about 1:15am on Sunday.

By the time police and 15 Patong Municipality firefighters arrived there was little left of the stilted, two-story dwelling, he said.

Police questioned 53-year-old Ha Channoi, the owner of the home, who was on the upper floor with his wife and one son when the fire broke out downstairs.

All three made it out safely and no injuries were reported.

Mr Ha said he often reprimanded his 34-year-old son-in-law for his failure to be a good family man and had suggested a trial separation from his daughter.

The son-in-law, thinking he wanted to end the relationship completely, replied with threats to burn down the family home or even kill him, Mr Ha said.

Mr Ha said he initially thought the son-in-law was kidding.

He has reassessed that view now that his home has been reduced to cinders and his son-in-law is nowhere to be found.

Capt Jakkapong estimated the damages at about 700,000 baht.

Police are now seeking the son-in-law for questioning, but are not ruling out other possible causes.

No power, water in parts of Phuket Town tomorrow