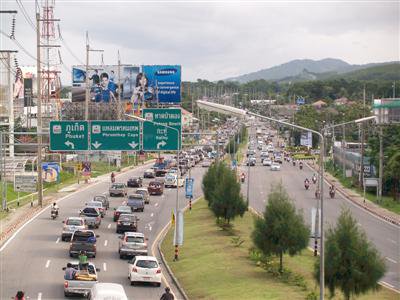 PHUKET: Three public hearings have resulted in firm decisions as to what shape three major road projects on the bypass road will take, if 1.55 billion baht in funding is made available for them.

Also presenting information and fielding questions were Kasem Sriwaranan, Director of the Survey and Design Office at the Department of Highways, and representatives of consulting firm Thai Engineering Consultants (TEC).

The meeting was attended by about 100 people, including local government officers and local residents.

The final session ended with a resolution that a four-lane, 570-meter underpass should run under Wichit Songkram Rd at the Darasamuth School Intersection to improve north-south traffic flow along the bypass road. the project cost was estimated at 600 million baht.

At the Samkong (Tesco Lotus) intersection about two kilometers to the north, a four-lane, 610-meter underpass costing 700 million baht is needed, again to improve traffic flow.

East-west traffic would pass over the junction via a 969-meter flyover connecting Yaowarat Rd on the Rassada side with Phra Phuket Kaew Rd on the Kathu side. At an estimated cost of 250 million baht, the structure would reach a maximum height of almost eight meters above the existing road surface.

The flyover would be designed in a Sino-Portuguese style, aimed at making it a Phuket landmark, the consultants said.

As for funding, the projects are already included in the 10-year master plan for highway development [years 2010 to 2019], but they must be funded through the annual fiscal budget. For that, they will be up against many other projects nationwide, Mr Kasem explained.

“Construction at each intersection should take about two years to complete, but work will not start at [different intersections] the same time,” he said.

All participants voiced support for the projects in terms of reducing traffic congestion and improving road safety, but some voiced concerns about the specific safety issues.

Arunee Sirisamurpak, Director of the Wichit Songkraam School, expressed concern for the safety of the school’s 1,400 primary-level students when crossing the Darasamuth School intersection to reach the school grounds.

“Another problem is that noise during construction will disturb classes because the school buildings are quite near the road,” she added.

Another local resident told the hearing that road signs informing the public about the project should be in English as well as Thai so that foreigners can keep abreast of developments.

The same person also called for a median strip along Chao Fa West Road to prevent motorists from doing U-turns “wherever they want”.