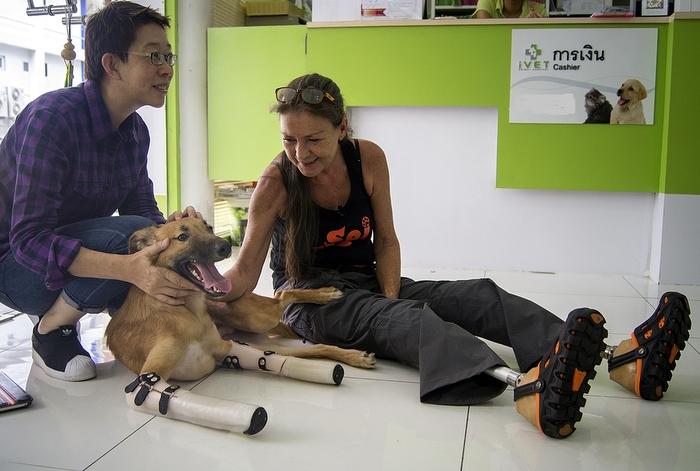 PHUKET: A puppy that had its two front legs hacked off earlier in May has been fitted with new prosthetic legs, the Phuket-based charity Soi Dog Foundation announced on Sunday.

Theprachen Srisoda, 36, reportedly hacked off the puppy’s front legs with a sword because it had chewed one of his shoes left outside his house. Public outcry and a 96,000-signatories petition organized by the Soi Dog Foundation saw Theprachen sentenced to one month’s detention by a court under the new Animal Welfare Law.

Thailand’s new animal welfare laws have only recently criminalized animal cruelty. The maximum penalty under the law is a two-year custodial prison sentence and a 40,000 baht fine.

After the attack, the puppy, named Cola, underwent treatment at a Bangkok clinic.

Last week Soi Dog Foundation co-founder Gill Dalley flew to Bangkok and brought Cola back with her to Phuket to continue his recuperation and rehabilitation.

Ms Dalley, herself a double amputee as a result of a rare bacteria she picked up while saving a dog in 2004, is now teaching Cola to walk again.

Even when not wearing his new legs, Cola has managed to teach himself to walk on his back legs, holding his stumps in front of him ‘kangaroo style’.