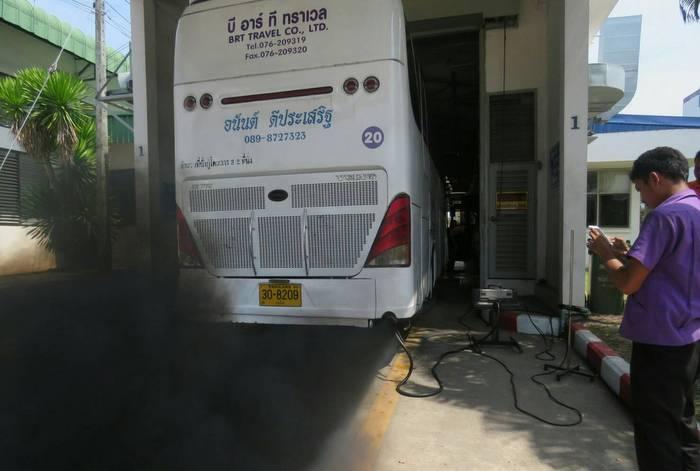 PHUKET: A pollution-emitting tour bus was banned from service after a Facebook user posted a video showing clouds of thick, black smoke emanating from it, confirmed officials on Sunday.

Facebook user Joke Moodie, who posted the video, immediately alerted authorities to take action and shut the bus down.

“We spray-painted a ‘Do Not Use’ sign on the windshield of the bus right away,” he said. “By law, black smoke emissions cannot exceed 45 per cent of the exhaust. The bus will remain grounded until it is repaired.”

Mr Jaturong has urged citizens to notify authorities of any such vehicles on social media by posting number plates, as well as pictures and/or videos stating the time and date, or calling the PLTO on 1584.

“Photos help us a lot as they can be used to to prevent people from making fake reports,” Mr Jaturong said.

A similar incident led to another bus with emission levels of 99.8 per cent being banned in March (story here).

That bus was was back in business the next day after the owner paid a 1,000-baht fine and reduced the emission level to 12 per cent (story here).

Manhunt for murderer after rotting body found in forest