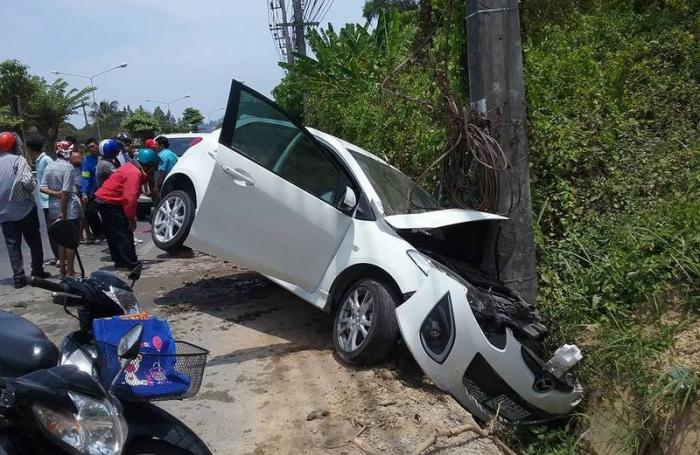 PHUKET: A Phuket man who pelted a car with stones, making the driver lose control and crash, has been charged for assault and causing damage to property after the family of three in the car was hospitalized.

Police received a call at 1:10pm yesterday that a car had lost control and hit a power pole in the Laem Hin area, after the driver attempted to avoid stones being thrown at their vehicle, confirmed Lt Col Chaleow Taihu of Phuket City Police.

At 8pm yesterday, the stone-throwing motorcyclist turned himself in at Phuket City Police Station.

Wattana Tinkohkaew, the Koh Kaew village headman, took Anucha Yeemuda, 21, to the Phuket City Police Station. Mr Anucha said he was on his motorbike with his wife Kanittha Yeemuda, 26, when Mr Jatuporn’s car cut him off multiple times.

Mr Anucha said he then dismounted his bike and threw rocks at the car.

He said he did not know there was a child in the vehicle. When he found out, he reportedly told Mr Wattana about the incident, who then escorted him to the police station.

The driver Jatuporn Kanpai, 25 and his wife Sunisa Kongkamkaew, 22, were taken to Vachira Phuket Hospital, while their one-year-old daughter was rushed to Phuket International Hospital.

“Ms Sunisa reportedly suffered a broken leg in the incident and her daughter sustained minor injuries. We will continue to check up on them,” Col Chaleow said.

According to a friend of Mr Jatuporn, who wished not to be named, he and the victims had a lunch appointment at Laem Hin Seafood restaurant that afternoon.

“The three left from Moo Baan Sri San Suchat,” Col Chaleow said. “They went for the U-turn at Sapam Sound, but were blocked by the motorbike.”

Mr Jatuporn could also face charges for reckless driving. However, police are waiting for the car passengers to recover so they can take statements.

Miracle escape for family of four in Phuket car-flip horror