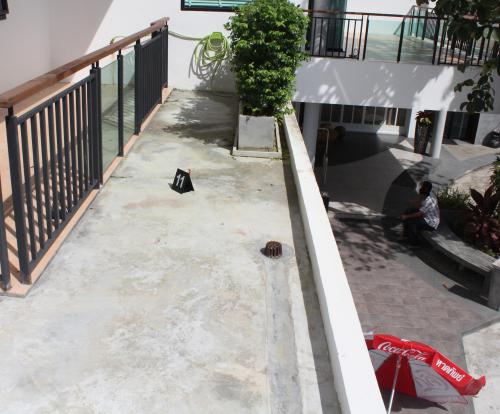 PHUKET: A Chinese tourist has died after falling from the second-floor balcony of a Phuket Town hotel this morning while bleeding heavily from deep lacerations.

Chinese tourists who were part of Ms Jiang’s tour group gave police a rough translation of the text: “We’ll be together forever. Even though you have gone, I will be with you.”

Ms Jiang was rushed to Vachira Phuket Hospital for treatment, but pronounced dead at about 3pm, Col Prawit told the Phuket Gazette.

“The room had two twin beds. The bed with the body of Mr Li in it was soaked with blood,” Col Prawit explained. “We found blood on the walls and floor too.”

Mr Li’s face was blue. It is likely that he was smothered, Col Prawit said.

Police believe that Mr Li had been dead for over 10 hours by the time officers arrived.

Ms Jiang and Mr Li were travelling with other Chinese tourists in Phuket and were expected to leave for China tomorrow.

“The group stayed in Patong the night before, and checked into the hotel at about 9pm last night,” Col Prawit said.

Buakaw breaking it down in Phuket