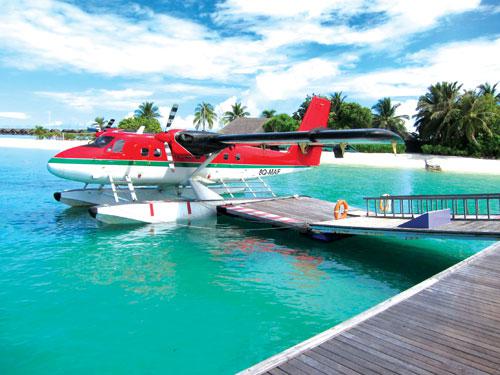 PHUKET: I’ve spent more years than I can recall hovering around sea level. Visualize Robinson Crusoe walking around a desert island, umbrella in hand and deep in conversation with a coconut named Friday.

A week ago I found myself on a small atoll about 45 minutes north of Malé, the capital city of the idyllic island nation, the Maldives. My attempts at talking to a small group of coconuts basking in the midday sun failed. Sunburned, I retreated back to the bungalow to mull over the prospects for the day.

Over the past few years, no other tropical country around the globe has managed to capture the imagination of travellers quite like this collection of atolls scattered among the Indian Ocean. When it was small a very long time ago, Tahiti was the tropical dream-scape. But these days, without a doubt, when you think of a remote island paradise, it’s the Maldives which comes to mind.

In the post global financial crisis world, the tourism market to the destination has shifted by leaps and bounds. The number one market to the country is Mainland China. Although the legacy snowbirds from Italy, Germany and other European nations still come, as in Phuket, somehow the seats have changed at the dinner table.

For hoteliers the financial performance of properties here is the Holy Grail. Average room rates remain among the highest in the world and the capture rate of guest spending is incredible, given that visitors find themselves hostages in their own private kingdom. For the most part, it’s one-island-one-resort and all the revenue has only one cash register.

Over the past five years, while trading was hit by the global financial crisis, and also some banner headlines over political issues, this year has seen a surge of growth. Hotel occupancy for international upscale and luxury properties is over 70%, an average rate of US$640 and RevPAR at US$460. Despite high operating costs, it’s not uncommon to see gross operating profits above 50%.

Life on the sunny side is sweet but, in a tribute to Asian food, can also turn sour quickly. As I’m typing this piece, the outcome over pivotal elections in the country remains a question mark. Within the last few years a tainted image has somewhat tarnished the Maldives’ reputation. Religious extremists who have wanted to ban alcohol and even spa treatments have created concerns for hotel owners.

Another key issue is domestic airlift which is requisite for a large percentage of hotels that are located out of short boating distance from the airport. Upon landing at the international airport, the majority of guests use floatplanes to get to such hotels.

About a year ago, two formerly-competing floatplane operators, TMA and Maldivian Air Taxi, were purchased by private equity firm Blackstone and merged into one entity. Since then, hotels have been pointed in their criticism over service and pricing.

What is on the horizon, though, is a series of new domestic airports which will operate on a concession basis. As for the lucrative floatplane sector, there are rumors that some start-ups are on the horizon. For now, single transfers round trip can hit US$400-800. This is on top of the fare paid from overseas.

A number of Thai hotel groups are active in the country, Anantara leading the way with multiple properties; Dusit and Centara are more recent entries and other local groups are eying the destination given the high-rate visitor profile. Of course, Phuket, Bali and Samui are often left asking the question: “Why can’t we get rates like that?”

All in all, the Maldives, for better or worse, is an absolutely unique destination and there is nowhere quite like it. Of course you may want to see what Friday has to say about that?