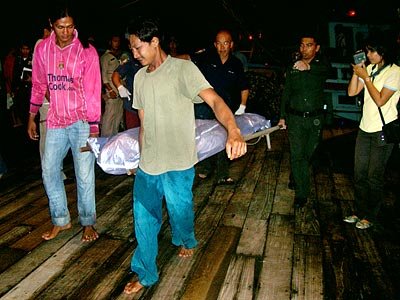 PHUKET CITY: The body of slain British sailor Malcolm Robertson was returned to shore late last night after its discovery by a fishing vessel yesterday afternoon.

The recovery of the body ended a week-long search by marine police and navy vessels as well as fishing boats.

For the original reports of how Mr Robertson was killed by three Burmese men, now in custody, click here and here.

Some 100 people, including the victim’s wife and children, were on hand at the Kiatcharoenchai fishing pier in tambon Kampaeng, La-Ngu, yesterday at about 11pm when the fishing vessel Kiatcharoenchai 25 arrived with Mr Robertson’s body.

Mr Robertson’s wife Linda was able to identify the body as that of her husband by a green watch that was still around his wrist.

Among the 100 people on hand when the vessel arrived were Satun Governor Sumate Chailertwanichkul, senior British diplomatic staff and police officials.

Rescue workers from the Trang-based Kusolsatan Foundation were also on hand to transport Mr Robertson’s remains to Prince of Songkla University in Haad Yai, where an autopsy will be conducted.

Forensic experts from the Songkhla-based Police Forensics Region 41 office took DNA samples from Mr Robertson’s daughter and son to confirm the body’s identity, allowing a death certificate to be issued and his remains repatriated to the UK.

The DNA results are also expected to serve as evidence in the state’s case against the three Burmese men.

The trio claimed they only boarded the Robertsons’ sailboat because they were trapped and starving on the remote Koh Dong island, some 75 kilometers from the mainland.

Capt Suppaluk of the La-Ngu Police today told the Gazette that all three men will be charged with theft, assault and murder.

The condition of the victim’s head was consistent with him having been murdered by blows to the head with a hammer, and not neck slashing, he said.

One of the three men, the 18-year-old, has already confessed to killing Mr Robertson, but it will be up to the courts to decide whether the other two will also be found guilty of murder, he said.

Police are still unsure if Mrs Robertson, who is expected to return to the UK soon, will need to return to Thailand to testify against the three men.

She is still in a hotel in the La-Ngu area and receiving assistance from the British Consul, he added.