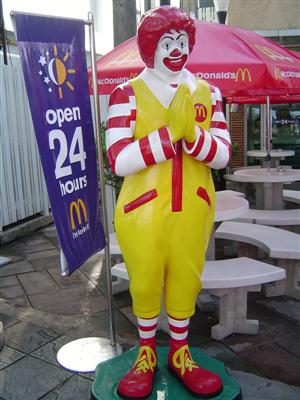 PHUKET CITY: A McDonald’s employee was seriously wounded in a stabbing attack while on his way home from a party at a friend’s house in the early hours of Saturday, March 29.

The attack took place at around 1.50am at a restaurant in front of the Bang Neaw Shrine, on Phuket Rd in downtown Phuket City.

After leaving the party, they called on another friend who was with some 10 other men at the time.

Boom and the friend talked for a few minutes.

A friend and colleague of the victim nicknamed as “Bang”, who was with Boom at the time, told the Gazette that “Boom was talking with his friend very loudly. Then one of the group fired a gun, but nobody was hit. Others in the group then pulled out knives and immediately began stabbing Boom. Three of us tried to escape. After they caught up with me, they started punching me. I finally managed to get away and called the police immediately.”

Boom sustained six stab wounds, one each to the side of the torso, back and calf as well as three to the hip area.

He was taken by Kusoldharm Foundation rescue workers to Vachira Hospital where he finally regained consciousness after 20 hours. His release date has yet to be determined.

The motive for the attack remains uncertain, but police believe it might be related to comments made by the victim to members of the gang.

Police say they will question the 18-year-old further when his condition improves.