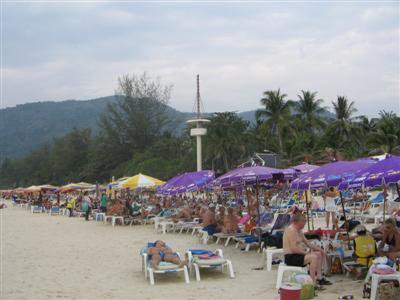 PATONG, PHUKET: A special committee tasked with finding ways to generate more noise and extra revenue for Phuket is moving forward with a unique plan that would allow businesses to broadcast advertisements through the island’s existing network of 19 tsunami warning towers.

The project will be launched early next month in Patong, where the entire beach front is covered by warning towers that emit a siren sound and pre-recorded voice messages at an impressive 121 decibels. The record-breaking volume is achieved through the resonance of the towers, with each individual tower able to achieve sound saturation across a radius of at least 1,500 meters.

Committee chairman Boonterd Wattanatong told the Gazette yesterday that the idea was such an obvious one that he was surprised no-one had proposed it earlier.

“The beach, rather than the town or residential areas of Patong, was chosen for the pilot project because there is such intense competition for the tourist baht along the sand, yet the provincial government still refuses to allow billboards on any of Phuket’s beaches,” he explained.

“This really is a win-win situation for everyone, because it doesn’t make much sense to have these expensive, high-tech towers just sitting there doing nothing all the time – especially when they could be generating revenues for the province and customers for advertisers,” he emphasized.

Under the plan, advertisers will be able to buy broadcast time from 7am until 7pm. The approved charges are 480 baht for a 15-second spot, and 820 baht for 30 seconds. These prices are uniform throughout the day, with no variation based on time of day.

“All we care about is ensuring that the advertising runs all day without interruption, so that we maximize revenue for the province, Mr Boonterd says.

“People want lively, active beaches. The jet-skis have helped to create background noise, but neither they nor the sound trucks operating along the beaches are capable of generating the kind of volume tourists want.”

Among businesses that have already expressed interest in purchasing broadcast time are a local Thai boxing stadium, a popular Patong discotheque, 11 tailor shops, a cinema, and a Rawai-based tattoo parlor.

Please join the the Phuket Gazette in wishing a Happy April Fools’ Day to one and all – except Mr Boonterd.