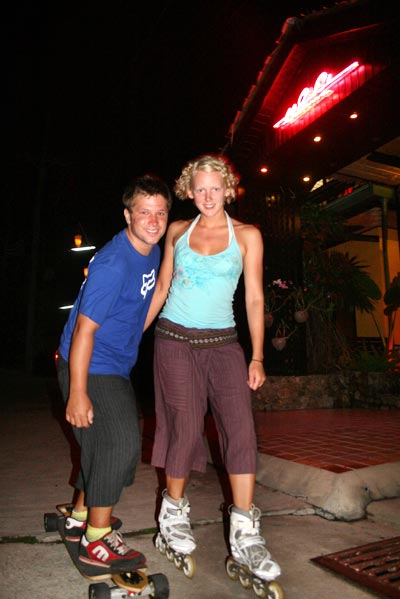 PHUKET: Two Swedes who are skating almost 5,000 kilometers from Chiang Mai to Singapore rolled in and out of Phuket earlier this month sporting a few road scars – but relishing their long slog south.

Education workers Jim Petersson, 25, and his girlfriend Maria Larsson, 29, have skated 30 to 90 kilometers a day through 21 Thai provinces since January.

Petersson is riding a long board skateboard, while Larsson is strapped into rollerblades. Driven by their goal of raising over 200,000 baht for the Swedish Childhood Cancer Foundation, the pair plans to arrive in Singapore on June 12.

In Phuket, the Swedes bungee jumped in Patong and drew stares from passing motorists as they skated along the busy Thepkrasattri Road on their way to rest their weary feet on the beach.

“People love to talk about our adventure,” Petersson said of the Phuket support for their cause.

At the time of writing, the skating Swedes had raised 100,000 baht and were heading from Penang to Malaysia’s east coast.

With no support vehicle and the danger of skating busy highways, avoiding potholes and living out of small backpacks, life on the road is tough, Mr Petersson admitted.

Having learned to skate just six months ago and suffering from food allergies to curry, nuts, beans and peas makes life on the road even tougher, he said.

Despite the hardships, the pair plan to work their way through Malaysia in under two months before eventually arriving in Singapore.

If they make it, they will fly to Bangkok and then back to Sweden.

With 8,180 fans following their progress on their Facebook page and plenty of Swedish media interest, Petersson said he is looking forward to returning home in June and catching up with friends and family.

But he won’t rest for long. In the summer he plans to skate the length of Italy with his
brother to raise funds for the same charity.