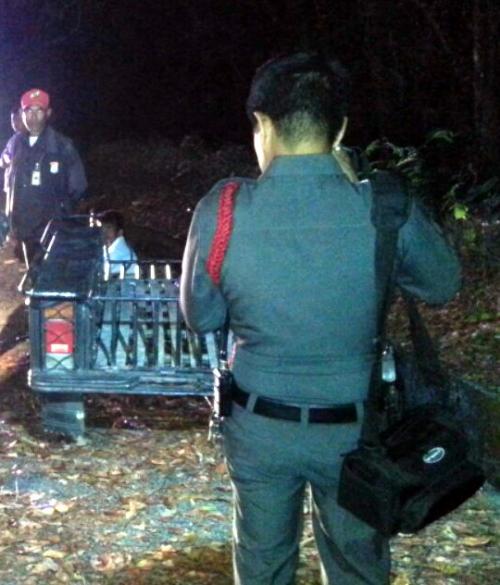 PHUKET: A motorbike with a sidecar carrying six Burmese workers slid down a hill and flipped over in the Blue Canyon Country Club in northern Phuket yesterday, killing one and seriously injuring two.

Police received the report of the accident at 6:50 pm and rushed to the scene with Kusoldharm foundation rescue workers.

“One of the passengers, Mr Muang, told us that they worked at the Blue Canyon Country Club and were returning home after work. Their motorbike had trouble going up a hill, and eventually slid down it at a high speed and flipped over,” said Chat Chai Police Duty Officer Prakob Boonkwan.

A Blue Canyon Country Club staff member clarified to the Phuket Gazette today that the Burmese workers were not part of their staff, but were part of an outsourced construction team working on a condominium project within the country club.

“Mrs Su, 35, died at the scene. One female passenger suffered a broken arm and one of the men broke a leg. The others were not seriously injured,” Lt Col Prakob added.

Six busted with 1.5 million in drugs in Phang Nga, north of Phuket