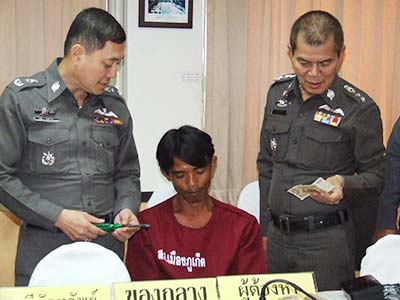 PHUKET: A 33-year-old Nakhon Sawan man who was just released from prison last year was arrested and charged yesterday with 13 counts of burglary in Phuket.

His previous jail time, 18 months in Phuket prison, stemmed from multiple instances of purchasing stolen goods from colleagues in the trade, according to police at a press conference this afternoon.

The accused, Weerapat Pikultong, was arrested at his rented house in Rassada where police say they found many stolen items, including a Honda Click motorbike, cameras, mobile phones, jewelry, Buddha images, cash, hand bags and other things.

Although police say that Weerapat has confessed to 13 individual burglaries, they continue their investigations in the belief that there may have been more.

He told the police that his usual modus operandi was to use nothing more than a simple screw driver to break into the homes, and that he always looked for locked doors before attemting a burglary as unlocked ones were likely to signify that there were people inside. A typical burglary, he said, would normally take about half an hour.

Following the press conference, Weerapat told the Phuket Gazette that he had been committing robberies for about 5-6 months because his girlfriend’s karaoke, located on Nimit Circle, had fallen on hard times. He had decided to help her but she did not know of his activities, he said.

The press conference was presided over by Phuket Provincial Police Commander Pekad Tantipong, his Deputy Komol Wattarakorn, and the new Phuket City Police Superintendent, Chote Chitchai, who just took up that position this morning.