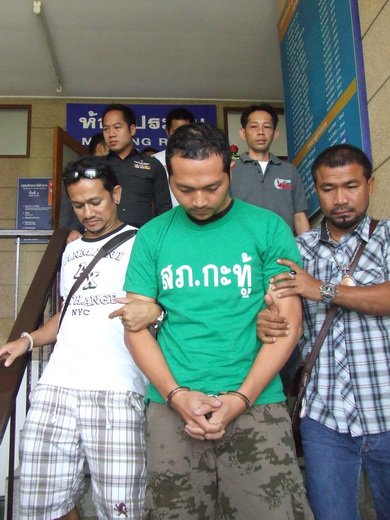 PHUKET: A serial rapist who preyed on young female members of the Phuket ethnic Nepali community is behind bars tonight after confessing to multiple charges of sexual assault, robbery and impersonating a policeman.

The accused, 30-year-old Phakpoom Maneerat, was presented to the media at a press conference at Patong Police Station at 10:30am.

The gravity of the case was evidenced by the fact that the gathering was presided over by Phuket Provincial Police Superintendent Pekat Thantipong.

For our previous story about Mr Phakphoom’s arrest in Phuket Town at noon yesterday, click here.

At the press conference, Mr Phakphoom admitted to abducting and raping six ethnic Nepalese women working in Patong, but police fear the number of victims may have been higher. They have encouraged other victims to contact them and file charges.

Mr Phakphoom confessed to impersonating a police officer to abduct the women, all employed in the tourist-oriented retail sales industry in Patong.

Some were taken to locations in Krabi and Nakhon Sri Thammarat, where they were confined and raped repeatedly over a period of days. Many also had valuables stolen, police said.

Married with two children, his wife operated an unspecified private business in Phuket Town, they said.

Some 100 members of the local Nepali community turned up for this morning’s press conference, about the half number who appeared at Patong Police Station last night after the arrest was announced.

Led by Thai-Nepalese club president Phanuphong Limbuprasertkup, the Nepalese offered bouquets of flowers to arresting officers and their superiors to thank them for the arrest.

Also at the station was the rapist’s latest victim, a 25-year-old woman who told police she was walking with friends at about 10:30am on March 28 along Phang Muang Sai Kor Road, behind the Jungceylon shopping complex, when a Toyota Vigo pickup cut them off.

The accused emerged from the vehicle, asking all in the group to produce identification papers, she said.

When she was unable to do so, he ordered her into the vehicle and then took her to an unspecified location in Krabi, where she was held in captivity and raped repeatedly until she was returned to Patong by the accused on April 1.

Head held low throughout the press conference, Mr Phakphoom admitted he used the same modus operandi in each case, identifying himself as an officer of the law to abduct and then rape and rob his victims.

They were always approached in the same area, near Jungceylon or the nearby JJ Plaza, he confessed.

He declined to reply to questioning from Maj Gen Pekad as to why he preyed solely on ethnic Nepali women, when woman of so many other ethnicities, races and nationalities could be found in Patong.

He simply confirmed that all of the victims were young, Nepali woman.

Cases of Thai people posing as government officers to extort migrant workers from Burma and lands controlled by the Burmese junta have been numerous in Phuket in recent years.

Most Burmese workers in Phuket work in the low-pay construction, fishing and rubber tapping industries.

Ethnic Nepalese are well established in west-coast tourism destinations, where they usually work in the tourism-based retail sales industry – even though such work is legally restricted to Thais.

Although their sales tactics are a common source of complaint to the provincial office, they are seldom implicated in serious crimes on the island.