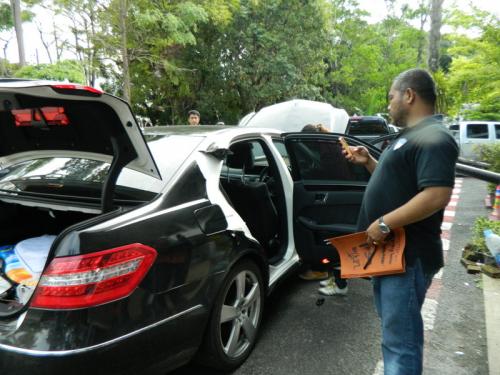 PHUKET: A joint investigation by police from Karon, Kathu and Phuket City has resulted in the arrest of a Bangkok couple who stand accused of robbing guest rooms at nine high-end hotels and resorts in Phuket.

Ritthimeth Singhaumpai, 33, and Sasithorn Seekam, 22, were arrested on Wednesday after they entered the Jungceylon car park in a black-on-black Mercedes-Benz E200 sports sedan.

The arrests came after officers began following the couple, having noticed that the make and model of the Mercedes was same as the one that had been caught on CCTV at many of the resorts where the robberies had occurred.

However, the Mercedes caught on CCTV was white.

“It had the same Krabi-registered license plates as those caught on CCTV, so we moved in to question the driver. Afterward, we learned that the color of the car had been changed by covering the vehicle with black stickers,” explained Karon Deputy Superintendent Sophon Borrirak.

Also, the license plates fitted to the Mercedes were originally issued to a Mazda, he added.

A search of the car revealed many items believed to have been stolen from hotel guest rooms.

Mr Ritthimeth stands accused of a spate of break-in robberies. Among them are incidents at the Baumancasa Karon Beach Resort on February 18 and April 21, when guests’ rooms were broken into and their room safes robbed.

Other robberies took place at the Thavorn Palm Beach Resort Karon on March 4, when guest-room doors were forced open and their belongings stolen; and at the Kata Beach Resort and Spa on April 24, when seven guest rooms were robbed, said Col Sophon.

“The CCTV footage from the hotels shows a white Mercedes E200 with the same Krabi license plates arriving at the hotels at about the same time the robberies occurred,” he added.

Hotel security cameras also positively identified Mr Ritthimeth at the Duangjitt Resort and Spa in Patong on April 27 and at the Phuket Graceland Resort and Spa on April 26. Both resorts were robbed on the corresponding dates.

During questioning, Mr Ritthimeth claimed to be the son of a prominent Thai government official.

“He claimed he was the son of the well-known official and that the Mercedes he was driving had a sticker on the windscreen marking the ’24th Session of Parliament, 362 MPs’,” Col Sophon said.

“However, he did not name which MP he was supposedly the son of. Also, it is difficult to confirm whether or not the stickers are genuine as they are pretty easy to get,” Col Sophon added.

Mr Ritthimeth was charged with breaking and entering private property and committing theft at night.

Police are still investigating whether or not Mr Ritthimeth was involved in any other recent hotel robberies in Phuket.