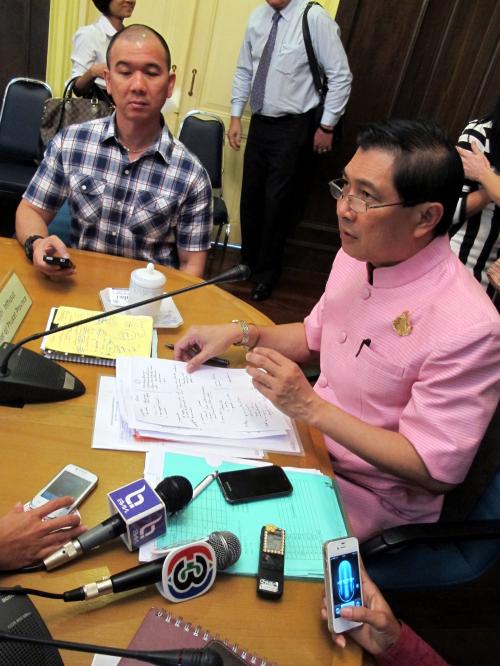 Phuket’s beach waters were regularly monitored in the past, but budget cuts brought an end to that program (see p8 and p9 of the digital Gazette online here). The Governor’s plan to have the Phuket Environmental Office conduct tests every two months* means a single government office will once again be responsible for keeping an eye on water quality around the island.

Gov Maitri met behind closed doors with 11 consul-generals yesterday, in what has become a quarterly meeting to discuss issues concerning tourists on Phuket.

At a press conference following the closed-door meeting, Gov Maitri said he outlined the three major underpass projects at Darasamuth, Tesco Lotus and Bang Khu intersections, as well as road projects set to get off the ground in the next few years at Chalong Circle, Klong Koh Pee Road and between Phuket International Airport and Koh Kaew.

Noting that the construction would slow traffic, the Governor asked consuls to forewarn their citizens.

“The Governor asked the consuls to tell tourists to plan their routes carefully as they navigate around Phuket, and to schedule extra time in case of traffic jams,” Deputy Honorary Consul of the Russian Federation Santi Udomkiratak told the Phuket Gazette.

The illegal taxi problem will be handled by AoT at the Phuket International Airport, the Governor said, and outside of the airport, local police officers will be on the lookout for illegal taxis.

The next meeting with foreign consuls will be held on November 26 at Phuket Provincial Hall.

* The original report stated that the tests would be conducted bi-monthly.