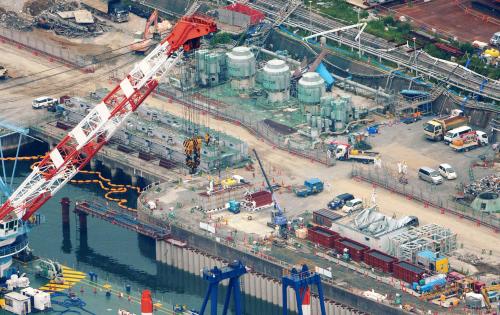 PHUKET: Contaminated water with dangerously high levels of radiation is leaking from a storage tank at Japan’s crippled Fukushima nuclear plant, the most serious setback to the clean up of the worst nuclear accident since Chernobyl.

The latest leak is so contaminated that a person standing half a metre (1 ft 8 inches) away would, within an hour, receive a radiation dose five times the average annual global limit for nuclear workers.

After 10 hours, a worker in that proximity to the leak would develop radiation sickness with symptoms including nausea and a drop in white blood cells.

“That is a huge amount of radiation. The situation is getting worse,” said Michiaki Furukawa, who is professor emeritus at Nagoya University and a nuclear chemist.

The embattled utility Tokyo Electric has struggled to keep the Fukushima site under control since an earthquake and tsunami caused three reactor meltdowns in March 2011.

Japan’s Nuclear Regulation Authority has classified the latest leak as a level 1 incident, the second lowest on an international scale for radiological releases, a spokesman told Reuters.

It is the first time Japan has issued a so-called INES rating for Fukushima since the meltdowns. Following the quake and tsunami, Fukushima was assigned the highest rating of 7, when it was hit by explosions after a loss of power and cooling.

A Tokyo Electric official said workers who were monitoring storage tanks appeared to have failed to detect the leak of water, which pooled up around the tank.

“We failed to discover the leak at an early stage and we need to review not only the tanks but also our monitoring system,” he said.

Tokyo Electric, also known as Tepco, said it did not believe water from the latest leak had reached the Pacific Ocean, about 500 metres (550 yards) away. Nonetheless, continued leaks have alarmed Japan’s neighbours South Korea and China.

PHUKET: Accused Boston Marathon bomber Dzhokhar Tsarnaev was badly injured when taken into custody by federal agents in April, with multiple gunshot wounds, including one that had fractured his skull, according to unsealed court papers.

A trauma surgeon detailed the suspect’s condition in a hearing the day the Chechen immigrant, who was lying in a Boston hospital bed, was first charged over the bombing attacks that killed three people and wounded about 264.

Tsarnaev, now 20, is the survivor of a pair of brothers accused of carrying out the worst mass-casualty attack on U.S. soil since 9/11. A pair of homemade pressure-cooker bombs exploded on April 15 at the finish line of the Boston Marathon, which was crowded with thousands of spectators, volunteers and athletes.

“He has multiple gunshot wounds, the most severe of which appears to have entered through the left side inside of his mouth and exited the left face, lower face. This was a high-powered injury that has resulted in skull-base fracture,” Dr Stephen Ray Odom of Beth Israel Medical Center testified on April 22, according to court papers unsealed late Monday.

Tsarnaev was arrested on April 19, four days after the bombing attack, at the conclusion of a day-long lockdown of most of the Boston area that began when he and his older brother allegedly killed a police officer at the Massachusetts Institute of Technology, carjacked a man and engaged in a gunbattle in the suburb of Watertown that ended with 26-year-old Tamerlan Tsarnaev dead and Dzhokhar on the run.

Police found the younger Tsarnaev hiding in a boat in a backyard.

Tsarnaev also sustained multiple wounds to his legs and arm but was alert and aware of his surroundings, Odom said.

When Tsarnaev appeared in court in Boston last month to plead not guilty to charges that carry the threat of the death penalty, his face appeared swollen and his left arm was in a cast.

Tsarnaev is currently being held at a prison medical center in Fort Devens, Massachusetts, west of Boston, to where he was moved on April 26 after a week at Beth Israel Deaconness Medical Center, a hospital that at the time was also treating many of his alleged victims.

PHUKET: Mahmoud Qarou packed his bags two days ago, joining tens of thousands of Syrian refugees escaping into northern Iraq, convinced that the two-year conflict could only get worse.

About 35,000 Syrian refugees have poured into neighbouring Iraqi Kurdistan over a new border crossing since Thursday, fleeing a surge in attacks by al Qaeda-linked Sunni Arab rebel group al-Nusra Front on Kurdish villages near the border.

“There is no peaceful solution in Syria. The regime is bombing us and al-Nusra Front members are blowing themselves up all over the place,” Qarou said in front of rows of United Nations aid tents.

The sudden massive exodus has raised the prospect of Iraq being dragged deeper into Syria’s war. The leader of Iraq’s Kurdish region, with thousands of troops under arms, has pledged to protect his kinsmen in Syria from attacks by al Qaeda-linked fighters who hold territory on both sides of the frontier.

Men, women and children crossed a temporary metal pontoon bridge over the Tigris River, carrying small knapsacks or rolled up carpets stuffed with their possessions.

Outside dusty aid tents, some families had arranged their sa