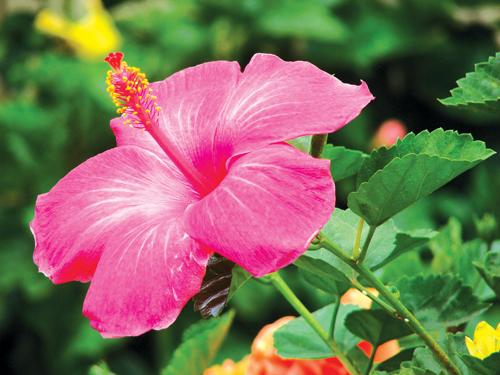 PHUKET: Few of us don’t relish the sense of ownership, of having our own pad or plot. And since we want to feel secure, we build walls around us to ensure that we can enjoy some privacy, as well as for a feeling of protection.

As the saying goes: “An Englishman’s home is his castle.”

But there are dissenters to this view. Robert Frost, the America poet, was wryly amused by his neighbor’s insistence that “good fences make good neighbors.”

He quietly begged to differ.

I was reminded of the issue when visiting a magnificent two rai garden in Cherng Talay.

“I see you have no stone walls”, I remarked.

“No”, came the owner’s reply. “The developers insisted on green screens, ‘walls’ composed entirely of plants.”

Very laudable and an initiative that should be copied elsewhere.

Alright, there are disadvantages. The dividing trees and shrubs needed to be planted on a steep earthen incline which separated each terraced plot. So there was an inherent problem with rain run-off and leaching of the soil.

However, plants with substantial roots were helping: trees such as yellow cane and lady palms at the back, evergreen shrubs in the middle and smaller ground-hugging plants at the front next to the expanse of lawn. A stepped effect that Gertrude Jekyll, the originator of the graduated herbaceous border, would have approved.

Such a mixed border planting is the exception rather than the rule. In general, Phuket residents prefer to put uniform green screens against existing walls, or to create internal patterns – after the manner of the formal European garden. There is plenty of choice .

The most favored shrub seems to be the ixora, usually the dwarf, orange flowering variety called coccinea, though it also exists in yellow, pink or white hues. Ixoras are employed in many contexts: as screens to decorate motorway verges, as hedges in front of garden walls or as borders. The leaves are small and glossy, evergreen (important with a hedge) and amenable to regular clipping, though this practice will reduce their prodigious blooming capacity. Ixoras are hardy souls, need little water and can withstand full sun.

I favor duranta repens (golden dewdrop), a vigorous grower which is also tolerant of a range of conditions. It will make a taller hedge than ixora – up to two meters and will form a dense bush when clipped. Look for the variety with bright yellow leaves. There is also a variegated form, and another with clusters of lavender flowers.

Both the Arabian jasmine (J.sambac) and wrightia religiosa are popular evergreen choices as screening shrubs. They have the added advantage of fragrant white flowers. Thais, who often use wrightias in containers as a movable screen, will tell you otherwise, but I prefer the bushier growth of sambac. Both are quite tall and can be pruned at the top to restrict height, both are evergreen and both can be propagated from cuttings. They will take longer to establish than duranta.

For a really tall barrier, many people go for the hibiscus. In the right conditions, it will form an attractive hedge up to four meters high, replete with – usually – scarlet blooms. Rosa sinensis is undeniably spectacular, but it is less amenable to Phuket’s humidity than our earlier choices, is disease-prone, and will need to be top-pruned to encourage bushy growth. Smaller and lusher-leaved variegated varieties, with leaves marbled with pink, red and green, have their adherents: properly trimmed, they will make neat, colorful hedges. Witness the formal planting in front of Chalong’s Home Pro. Durantas and ixoras complete the picture.

Witness too the neat hedge next to the Pearl outlet on Chao Fa East next time you pass by. A dense, neat hedge which shields a giant sator tree, it is composed, surprisingly, of tamarind saplings. This shows you can make a hedge out of most things botanical… And we haven’t even mentioned bamboo, or oriental box.

Tip of the week – Coping with salt-laden winds

Some plants do not relish a position where saline winds are a regular feature of life. In general, broad-leaved trees such as bananas, traveller palms and some with delicate fronds suffer the most. The leaves may split and allow the wind to pass through, but they will eventually shred and look ragged.

If these sail-shaped leaves are the most vulnerable, herbaceous plants such as eliconias or ensete which have broad leaves at the end of slim stems, will be affected.

As a general rule, use shrubs with small, leathery or glossy leaves such as tabernaemontana, or trees with open crowns. Other plants that will even thrive in sea breezes include the Indian milkweed (often used as a wind break), and the sea lettuce. The sea almond is a good choice (attractive late red foliage) as is the smaller geiger tree with its orange flowers.