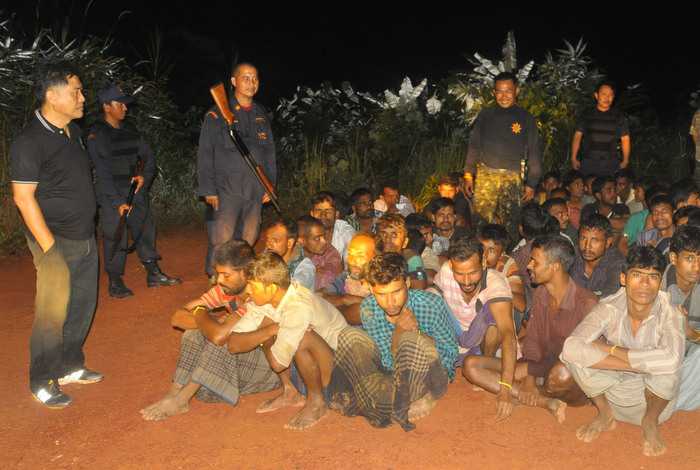 “All of them came from Bangladesh, where they found it too difficult to survive in the refugee camp, so they decided to come to Malaysia,” said Htoo Chit, executive director and founder of the Foundation for Education and Development (FED) (story here).

FED has been working on human trafficking issues for almost nine years, providing translation services, as well as some humanitarian assistance. A FED team was on-site helping the refugees this morning, Mr Htoo explained.

The trafficking victims had spent about 19 days on boats travelling from Bangladesh to Thailand, where they were to be then smuggled into Malaysia.

“Thai and Bengali brokers were handling them. Some of them were beaten due to language barriers,” Mr Htoo said.

However, during the interviews conducted by FED workers, one victim explained that he hadn’t paid to go to Malaysia, but had been forced onto the boat.

“I didn’t want to go, they forced me… My hands were tied and they put me in a boat. I don’t want to go to either Malaysia or any other country. I was kicked while we sailed to Thailand, and I was beaten when I was on the island in Thailand. I would like to back to Bangladesh,” said a man, who translators named only as Mr Mohamad, 35.

The more than 80 individuals detained were caught in two groups – no women or children were part of either of the groups, Mr Htoo confirmed.

“Six of them look very young, but they said that they are 18 years old,” Mr Htoo said.

The first group were kept on a Thai island for about five days before they were transferred to Takuapa in Phang Nga.

“A source told us that a group of Rohingya were sneaking through a rubber tree plantation,” Takuapa District Chief Manit Pianthong said.

“Two Thai nationals were on guard to keep an eye out for officials. They have been arrested for their role in the human trafficking network.”

Prakob Mard-Ardum, 43, and the other Thai national, who police declined to name as he is a minor, can face charges under Section 63 of the criminal code, which states: “Whoever brings or takes an alien into the Kingdom or does anything which helps, assists or facilitates an alien in making and entry into the Kingdom in contravention of this Act, shall be punished by imprisonment not exceeding 10 years and a fine not exceeding 100,000 Baht.”

“They both confessed that they were paid 500 baht to watch out for officers. They told us that they had done this many times in the past few months,” Mr Manit said.

Counter to the information provided by translators on-site, Mr Manit believes that the men detained are all Rohingya from the war torn Rakhine State in Myanmar.

Police suspect that 12 men escaped during the first raid.

The second group of about 30 men were quickly caught by Thai officials, Mr Htoo confirmed. However, his team has yet to speak with them.

Mr Manit believes hundreds of refuges are still in hiding in the area.

“Human trafficking like this has existed in Thai society for a long time. I believe that there are very powerful people behind all of this,” said one Thai official who declined to be named.

Mayor gives reward for return of cash-stuffed wallet in Phuket