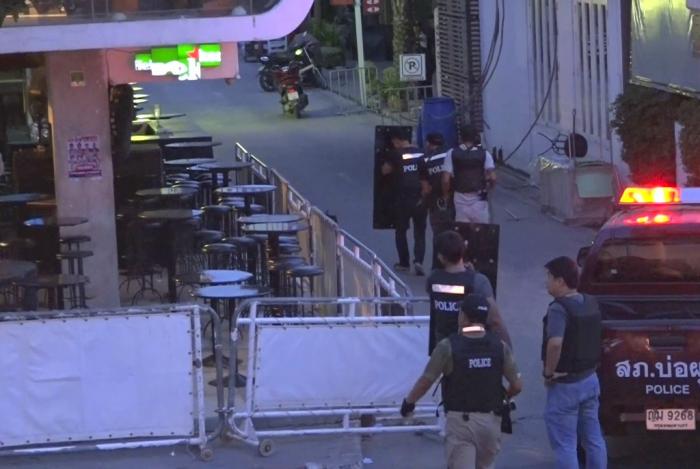 SAMUI: The manager of a popular bar near Chaweng Beach on Koh Samui reportedly shot dead his friend last night before turning the gun on himself after a shootout with police and a five-hour standoff.

Bor Phut Police officers arrived at Bar Solo around 1:30am to find the body of Chulit Somakert lying on the floor. His alleged killer, Samroeng Thongpan, reportedly shot at the officers before fleeing to the 2nd floor, where he barricaded himself in.

Police cordoned off the area and attempted to persuade Mr Samroeng to surrender.

“We tried to contact Mr Samroeng on his phone and we used a megaphone, but he did not respond,” Bor Phut Police superintendent Thewet Pluemsut told the Phuket Gazette today.

At about 6am, two teams of armed police with bullet-proof shields broke down the barricade, to find Mr Samroeng dead from a gun shot to the head.

A witness said the men were friends but they had fallen out over a million-baht money sharing scheme and that Mr Samroeng owed Mr Chulit money.

“There were customers in the bar when Mr Samroeng opened fire on his friend, letting off several rounds, and they had to take cover,” said Col Thewet.