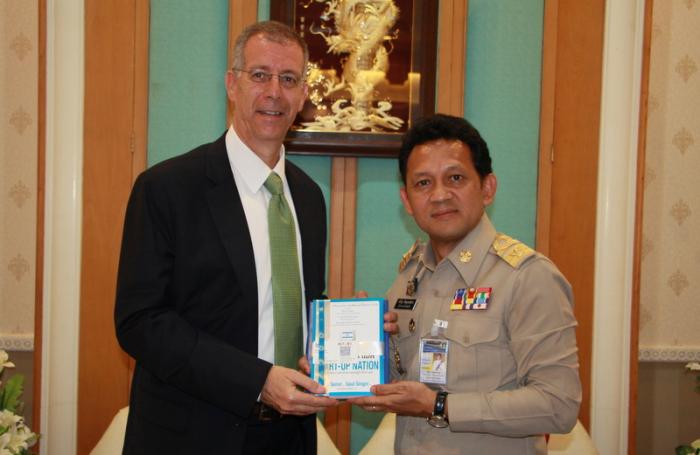 PHUKET: Israeli Ambassador Simon Roded met with Phuket Governor Chamroen Tipayapongtada at Phuket Provincial Hall yesterday, where he thanked the governor for not allowing a controversial French comedian to take the stage in January this year.

A performance by controversial comedian and hate-speech convict Dieudonne M’bala M’bala was scheduled to take place at the Illuzion night club in Phuket, but was cancelled after the venue pulled the plug less than 24 hours ahead of the Frenchman’s scheduled appearance on stage (story here).

“Amb Roded thanked us for keeping Mr M’bala M’bala from performing, because his speech could affect Israel’s internal security,” Governor Chamroen said after the meeting.

Illuzion legal representatives said at the time that one of the owners of the venue was contacted the evening before the show by Gov Chamroen, who asked them to cancel the show due to the unknown content of M’bala M’bala’s performance, which could have upset the Jewish community.

Another topic of discussion at the table yesterday was maintaining and promoting tourism coordination.

“Amb Roded requested tourism coordination between Israeli and Phuket officials, adding that Phuket is one of the preferred destinations of Israeli tourists, with at least 1.5 million visitors from Israel visiting the island every year.”

Another issue raised by Amb Roded was wastewater management.

“He broached the subject because Israel has expertise in wastewater treatment technology,” said Gov Chamroen.

“He also had some helpful suggestions about the smart city project.”

Governor Chamroen affirmed to Amb Roded that Phuket sees public safety as its first priority, especially where tourists are concerned.

He also reassured the ambassador that officials are closely monitoring the island to ensure that peace and order are maintained.