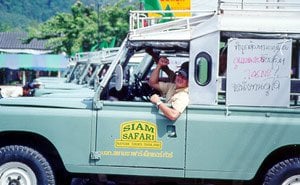 PHUKET TOWN: About 100 staff from four safari tour companies turned out today to demonstrate against tuk-tuk and taxi drivers, their rivals in a dispute over who may ferry customers between hotels and the safari companies. The protesters sat in about 30 vehicles outside the offices of Phuket Member of Parliament Suwit Sa-Ngiamkul on Phang Nga Rd, saying they had taken the day off to complain about the “bullying behavior” of the tuk-tuk drivers. About 200 tuk-tuk and taxi drivers mounted a demonstration of their own on December 10, accusing the safari tour companies of breaking a verbal agreement to use only tuk-tuks and taxis to carry guests betwen their hotels and the safari companies. Today, despite saying that the tuk-tuk drivers had threatened violence, the employees from Island Safari, Siam Safari, Amazing Bhukit Safari and Southern Eco Nature Tour decided to make their point. Alisa Jhantharak, Marketing Assistant at Siam Safari, said, “We are protesting because now we can’t pick up guests from hotels in Kata-Karon. The tuk-tuk drivers say that if we do pick up clients, they can’t guarantee the security of either the tourists or our drivers. “We have contracts with foreign companies and it’s impossible to change those contracts.” Sorrathorn Chayasakulwong, the company’s Marketing Manager, said, “We have cancelled all bookings involving Kata-Karon hotels. It would cost us 20,000-30,000 baht a day in Kata-Karon. “If we give in to them, they [the tuk-tuk drivers] will continue to do it over and over again.” K. Sorrathorn expressed concern about the effect that news of the dispute and the threats would have once they came to the attention of the overseas travel agents who made bookings for tourists heading for Phuket. “Tourists may not visit Phuket or Thailand anymore,” K. Sorrathorn said. “The Tourism Authority of Thailand don’t seem to be able to give [the safari firms] any way out.” The Minister of Tourism and Sports, Sontaya Kunplome, was coincidentally having lunch today at the Royal Phuket City Hotel, Phuket Town. Some of the protesters decided to give him details of the dispute. “We’ll let the provincial authorities take care of this problem,” the minister said. After the recent tuk-tuk and taxi protest, the provincial autorities, in the shape of Governor CEO Pongpayome Vasaputi and Pol Col Sati Malakanont of Chalong Police Station, announced an agreement whereby the safari companies would be barred from collecting their own customers from hotels.

One tambon, one product, one Christmas