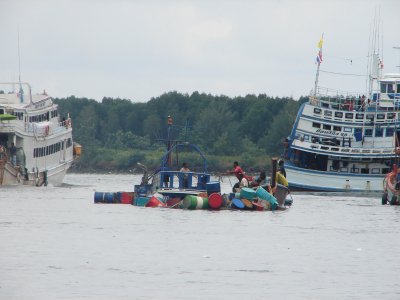 PHUKET: A team of sea gypsy divers have successfully re-floated and towed ashore the Choke Taworn 6, which sunk in heavy seas off Phuket earlier this month with an estimated 25,000 liters of diesel fuel aboard.

The team, led by Surin Pramongkij, successfully brought the vessel to the surface at 11am.

The boat was then towed by its sister vessel Choke Taworn 8 up Klong Tah Chin in Rassada.

However, it ran aground in shallow water before reaching its final destination, the Asian Phuket Marine Dockyard in Rassada.

At 2pm, the sea gypsy divers were busy trying to reposition air-tight oil drums inside the vessel to make it float higher in the water in order to complete the mission.

There were some signs of oil leakage around the wreck, but the estimated 25,000 liters of diesel fuel in a holding tank inside the modified vessel’s hull was still there.

Choke Taworn 6 was en-route to Koh Racha Yai with a cargo of diesel fuel when it foundered in heavy seas and sank in 43 meters of water about 12 nautical miles southwest of Phuket on September 4.

The team of divers, from the Laem Tukkae sea gypsy community on Koh Siray, was hired by the ship owners to salvage the vessel and its cargo.

The darkness at 43 meters and the sea gypsies’ method of breathing compressed air pumped down though hoses from the surface drew criticism and concern from Gazette readers who thought the mission too risky.

However, the divers’ ability using this method impressed all who watched them work in the dark, dirty water of Klong Tah Chin today.

Team leader Surin told the Gazette he hoped to have the vessel in dry dock before nightfall.