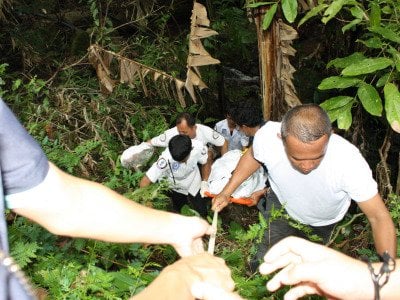 PHUKET: Police this afternoon identified the body of the woman who was raped, murdered and abandoned in the hills just south of Patong. They told the Gazette the corpse was that of karaoke hostess Anicha Khaigunha, 21, from Khon Kaen.

Her body was found about three kilometers from Sirirat Rd, halfway between Patong and Karon, by waterworks contractor Ong-ard Kongkaew, 30, about 1pm yesterday.

Mr Ong-ard was on his way to conduct checks on water supply pipes further into the hills.

Miss Anicha’s head had suffered severe trauma and her body had been covered with large stones, with only her right hand remaining exposed.

Near her body officers found her underwear and a black bra, a used condom, a 20-centimeter long knife, a red T-shirt emblazoned with a skull and the word “Rockers”, a mobile phone broken into several pieces, two pairs of black-and-white slippers and two candles: one used, one not.

Chalong Superintendent Police Colonel Wichit Intorrasorn said the prime suspect in the murder investigation was one of the victim’s boyfriends, whom he named only as “Maew”.

He explained that officers took the clothes found near her body and showed them to as many bars in Patong as was necessary until someone recognized them as belonging to Miss Anicha.

He added that she worked at a karaoke bar on Soi Nanai for three months before her murder.

She left Khon Kaen when she was 16 years old, he added.

As Anicha apparently had many boyfriends, Col Wichit said jealousy was the likely motive for the murder.