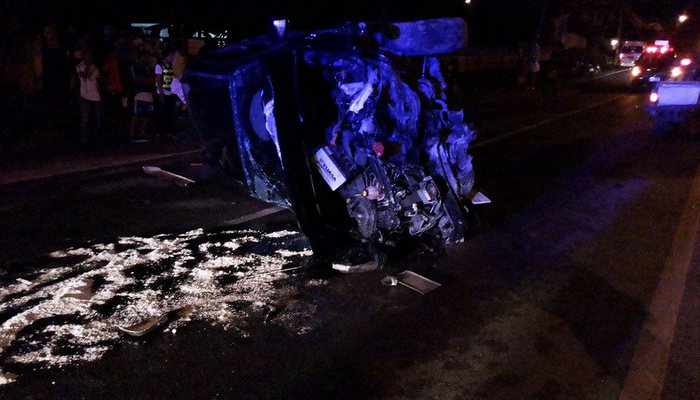 PHUKET: A Russian tourist was thrown from his vehicle and died last night after overshooting a curve and crashing into a wall on Wiset Road.

Chalong Police were called to the scene at about 11:30pm.

“When we arrived, we found a badly damaged Toyota Fortuner lying on its side in the middle of the road. On the side of the road we saw a damaged power pole,” Patiwat Yodkwan of the Chalong Police told the Phuket Gazette.

Witnesses told police that Mr Zhukov was driving north, toward Chalong Circle, when he lost control of his vehicle at a curve near the Vijitt Resort, said Maj Patiwat.

“His car crashed into a wall and then hit a power pole. The impact sent the vehicle flying into the street,” Maj Patiwat explained.

Police believe Mr Zhukov was not wearing his seat belt at the time of the crash, prompting Maj Patiwat to urge motorists to be safe and buckle up whenever in a moving vehicle.

Mr Zhukov’s body was taken to Vachira Phuket Hospital and his family have been notified of his death.