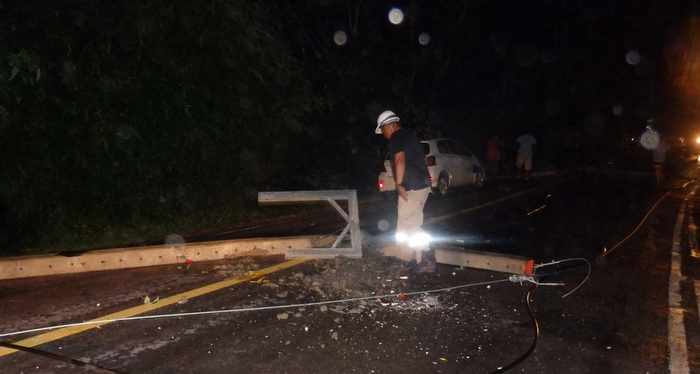 PHUKET: A motorist narrowly escaped injury last night when a falling tree toppled power poles onto the road, tearing off the driver’s rearview mirror, but leaving the rest of the car undamaged.

Worawut Trisook, 32, was driving along the Baan Sakoo-Nai Yang Road at about 8:30pm when a rubber tree fell, striking power lines and pulling down five utility poles.

Mr Worawut and his car escaped serious injury. However, the area experienced a two-hour blackout and traffic was halted while the poles and tree were removed.

“I was driving home, and there was heavy rain and strong wind. I’m so lucky the tree and the poles didn’t hit me,” he said.

In a separate incident, a taxi driver was headed to Phuket International Airport at 5:30amon Saturday when a large tree fell on the hood of his car near the Tah Chat Chai Temple in Thalang.

Rescue workers called to the scene found the driver, uninjured, removing branches from around his vehicle.

Phuket was pummelled by strong winds yesterday, with gusts at Phuket International Airport broaching 50kmh, Near Gale Force on the Beaufort scale.

Though wind speeds dropped to about 28kmh today, more strong winds and rain are expected to continue through the week, Sopon Sangkaew of the Thai Meteorological Department’s Phuket Office told the Phuket Gazette.

“Waves will be two to three meters high and small boats should not leave shore. Big boats should check updated weather reports from the Phuket Meteorological Department before leaving port,” Mr Sopon advised.