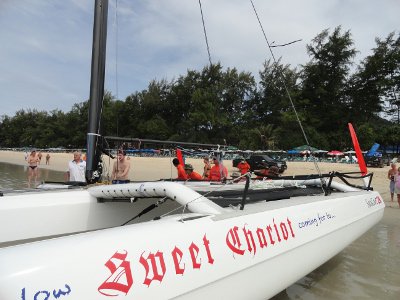 PHUKET: More than 20 officers from Kata-Karon Municipality along with volunteers and lifeguards stationed at the Royal Thai Navy Sea Rescue unit heaved together this afternoon to refloat two King’s Cup Regatta boats into the water at Kata Beach.

The two boats were left stranded on the sand this morning after strong winds pushed them onshore last night.

Supachai Janphet, an officer stationed at the rescue unit, told the Phuket Gazette that the 44-foot monohull Ichi Ban and the SeaCart26 trimaran Sweet Chariot were re-floated at 3pm.

“Both boats were re-floated successfully. Neither of the two boats suffered any damage,” he said.