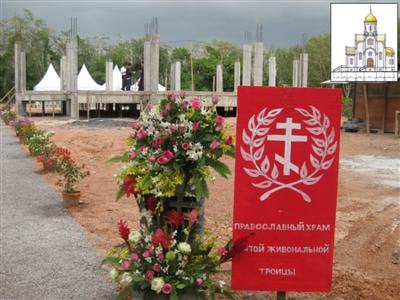 THALANG, PHUKET: A Russian Orthodox Church now under construction in Tambon Thepkrasattri is scheduled for completion by the end of next year.

The groundbreaking religious ceremony at 4pm yesterday was performed by Archbishop Hilaion of Volokolamsk from Moscow and other clerics representing the Russian Orthodox Church in Thailand.

The service was attended by Vice Governor Smith Palawatvichai and Rasada Mayor Surathin Lianudom. About 50 Russian tourists and expats also joined the ceremony.

The 50-million-baht church will stand on two rai of rubber tree plantation land off Nanai Rd in Thepkrasattri Village 3, Thalang.

It will be dedicated as the ‘Holy Life-Giving Trinity on Phuket Island Church’ after its completion.

The church priest will be 31-year-old Thai National Danai Wanna of Prachinburi province, the first Thai ever to be ordained as a Russian Orthodox priest.

His preparation included six years of seminary study in St Petersburg, he said.

There are currently two Russian Orthodox churches in Thailand, one in Bangkok and the other in Chonburi.

A fourth church is under construction in Ratchaburi.