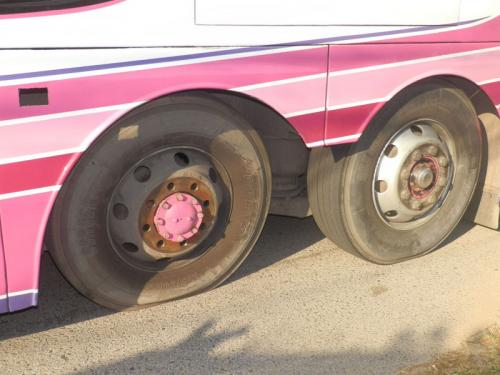 PHUKET: A wheel that had come off a Phuket tour bus raced off on its own down Thepkrasattri Road yesterday morning, narrowly missing a policeman in its path.

The bus, displaying a Pegas sign in its front window, had picked up 32 passengers at Phuket Airport and was heading towards a hotel in Kata when it lost a rear wheel near the U-turn in Srisoonthorn at about 8:15am.

“I was on duty at the U-turn and I saw a wheel coming right at me at high speed. I managed to jump out of the way in time, but it hit my motorcycle which was parked by the road,” he said.

After hitting the motorbike, the wheel continued at high speed across the street and hit and damaged the wall at Hang Krajok Tungnam Co Ltd, a construction supply store.

The bus driver, Manas Worasiri, 50, was charged with reckless driving by using an improperly maintained vehicle, and fined 600 baht.

“The bus is always checked as required. I do not know why this accident happened,” Mr Manas told police.

None of the passengers were injured, and by the time police arrived on the scene, they had all been picked up by another bus.

The only injury was to the wall at Hang Krajok Tungman, and a representative said that it is covered by insurance.