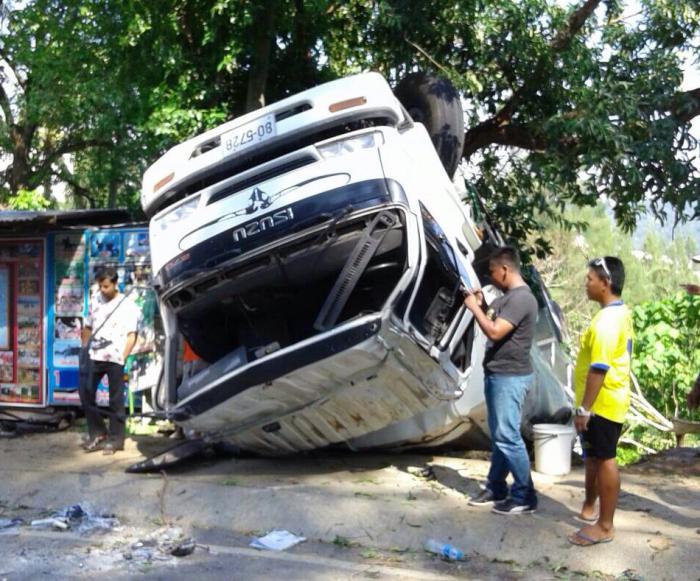 PHUKET: Phuket’s road death toll remains at one after “five days of danger”, but four injuries were added to the casualty tally after yesterday.

Three involved motorcyclists, two of whom had blood alcohol levels higher than the legal limit, and one involved a flipped water truck.

Shortly after midnight yesterday, Arun Boonkongmark, 24, who had been drinking, had an accident after cutting in front of a pick-up truck on the Pa Khlok-Muangmai Road.

At 6:30pm that day, a 30-year-old Russian tourist collided with a car in front of the Kamala cemetery on the Kalim-Kamala Road.

A few hours later, at 11:30pm, Rerngchai Pramongkit, 37, legally drunk, was involved in a single-vehicle accident when he fell off his motorbike.

The last official injury was a broken leg sustained by Bancherd Sae-Ung, 38, when a water truck struck him as it flipped over while descending a hill in Kata (story here).

Although two other men were hurt in that accident, only Mr Bancherd entered the official statistics.

“We only count people as injured if they are required to spend the night in hospital,” said a DDPM-Phuket officer.

The only death recorded so far is that of Chaiyaphum native Nannika Boonchorn, 27, who died after colliding at high speed with a motorbike with a sidecar at about 4pm on April 13 (story here). Ms Nannika also had a blood alcohol level above the legal limit.

The total casualties for five days of danger are one dead and 21 injured.

Dust to Dust: Phuket’s struggle to clear the air