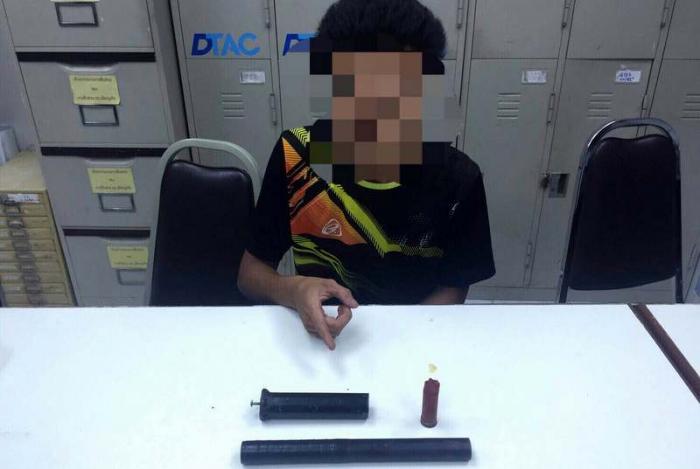 PHUKET: A teenage motorcyclist was arrested on Saturday evening for shooting at a 6-wheeled truck in the heart of Phuket Town.

The 18-year old reportedly shot at one of the truck’s wheels in anger after, he claims, it nearly ran him over.

“We had a report about the shooting on Srisana Road in Phuket Town at 4pm,” said Phuket City Police Lt Col Naruebadin Pangleesen, adding that they checked CCTV footage from the area and quickly identified the culprit.

The police would not reveal the ‘suspect’s’ name as he is a minor.

The boy was arrested at 7pm the same day on Soi Thiampracha Uthit in Rassada,” said Col Naruebadin.

Police confiscated from the boy a homemade gun, one bullet and the motorbike he had been riding at the time of the incident. He was charged with unlawful possession of a firearm. It is not clear why he was not also charged with firing the gun in public, and/or assault with a deadly weapon.

The boy reportedly claimed that he’d aimed for the truck’s tyre but had missed and hit the wheel well, which was damaged by the single shot.

“He said he was angry at the truck driver for almost running him over so he shot at the vehicle and then fled on his bike,” said Col Naruebadin.

Portuguese Man-of-War back at the beaches