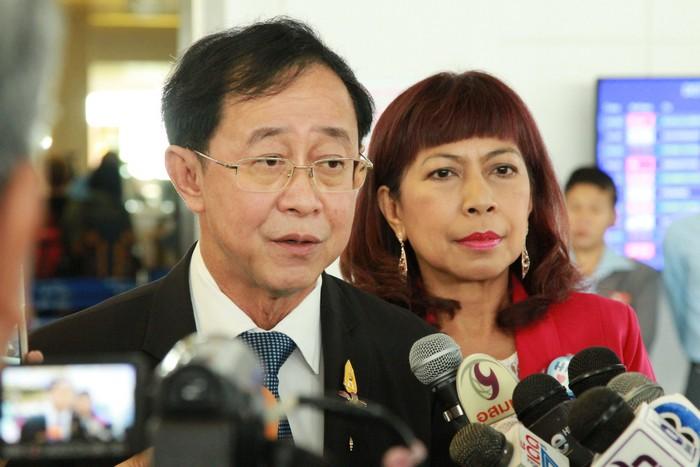 PHUKET: A stream of harsh complaints about the new terminal at Phuket International Airport prompted a visit by Transport Minister Arkhom Termpittayapaisith on Saturday.

Long lines, delays, the lack of essential equipment, insufficient and confused personnel, and angry passengers have all marred the opening days of the new facility (story here).

Mr Arkhom acknowledged that airport staff were dealing with shortages and ‘unexpected problems’, but assured the public and the press that steps were already being taken to resolve the issues.

Following complaints about long queues and slow service at the new terminal’s Immigration counters, 30 more immigration officers arrived on Friday and their computers are scheduled to be installed on October 3, confirmed the minister. “We asked for help from the TAT for the extra computers.”

“At least 36,000 people pass through immigration service every day; both departures and arrivals. There are fewer problems with arrivals than departures, which are at a peak between 8pm and 9pm, with many tour groups departing at about the same time,” said Mr Arkhom, adding that while there were 34 immigration counters in the departure area, only 13 of those counters even had a computer.

“On average there will be 15 immigration officers on duty at any one time, working in 6-hours shifts, which should be enough,” he said.

Mr Arkhom said that he was pleased with the overall readiness of the new terminal, despite the initial teething problems and failure to meet the promised opening date. “The check-in space is large, signs are in multiple languages, the baggage system is working well and the waiting area is expansive with the addition of the new gates,” he added.