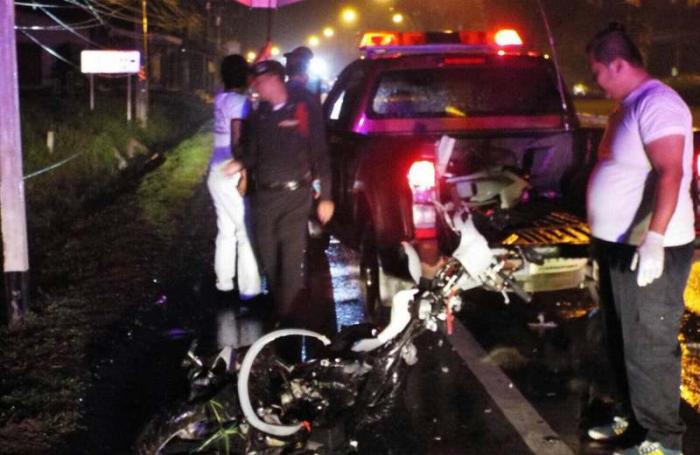 PHUKET: A motorbike rider was torn to pieces in a fatal ‘ghost riding’ collision on Thepkrasattri Road at about 4am today.

Piroon Aka, 44, was driving home to Mai Khao when he was in a collision with motorcyclist Puriwat Sukbanjong, 32.

Mr Puriwat was dismembered in the smash and ended up in a grotesque heap on a grass verge – his left left leg ripped off below the knee and his left arm severed at the elbow.

“Mr Piroon claimed that the motorcyclist was ‘ghost riding’ [driving south] along the northbound lane of the road near the Susco gas station in Baan Muang Mai,” said Thalang Police Maj Sanich Nookong.

“The car driver said the road was dark and that the motorcycle suddenly appeared, coming from the opposite direction, and smashed into his car.”

The left fender and windshield of Mr Piroon’s car was badly damaged in the crash and the motorcycle was left completely mangled.

Mr Puriwat was pronounced dead at the scene.