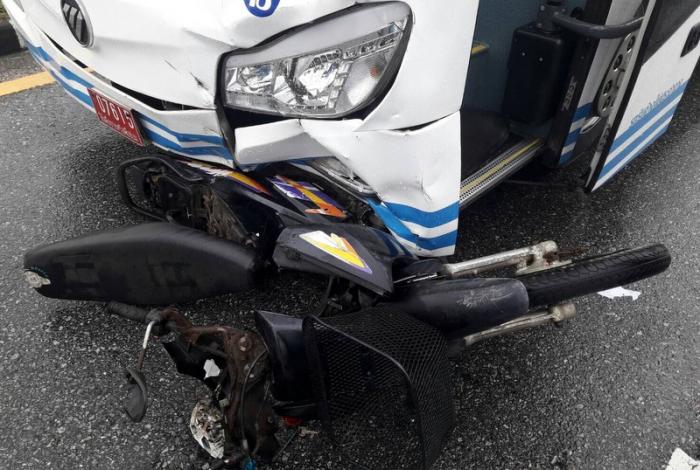 PHUKET: The Phuket Land Transport Office fined a transportation company 50,000 baht this morning after their unregistered bus killed a motorbiker attempting to make a u-turn yesterday.

The accident occurred about 4pm on the southbound lanes of Thepkrasattri Road, in front of the Hongyok Bumrung School in Baan Suan Maphrao, northern Phuket (story here).

“We called in Ratcharot Travel to our office this morning and fined them 50,000 baht, which is the maximum penalty for use of an unregistered vehicle,” PLTO chief Sommai Sudkhao told the Phuket Gazette today.

“Furthermore, we have suspended the licence of the bus driver, Tanu Longsamud. These measures have been taken independently from police actions,” he added.

Mr Sommai said that Ratcharot Travel Co is registered in Bangkok, but brought 30 tour buses to the province to expand their business.

“They have a branch here in Phuket. All of the buses are in the process of registering with the Phuket office but are facing issues with their documents,” Mr Sommai said.

“We have already told them that they can’t use the buses unless they are registered and granted yellow transportation plates.”

Yesterday’s accident, which claimed the life of 47-year-old Noppadol Chairab, incentivized PLTO officers to check for unregistered vehicles on the roads.

“We’ve begun checking on buses to make sure those vehicles are registered and safe to use,” Mr Sommai said.

Rider ripped to pieces in 4am horror crash