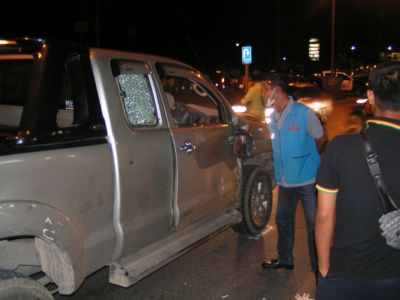 TUNG TONG: Police are investigating the shooting murder of a seafood restaurant owner early yesterday evening that caused a multiple-car accident at the bottom of Patong Hill.

Police thus far have no eye-witnesses to the murder, which took place about 6:40 pm.

Initially reported to police as a multi-car traffic accident, police and several vehicles of rescue workers from the Kusoldharm Foundation arrived quickly at the scene.

Inside a metallic-gray 4WD Toyota Hilux Vigo pickup that rolled to a stop near the intersection of Soi Bangtong, just north of the Go Kart Speedway, they found K. Sirichai unconscious but still breathing.

He had sustained a single 9mm bullet wound.

Fired from the driver’s side, the bullet had entered his right ribcage and ruptured his spine.

Four other bullets fired at the victim missed their target, hitting the driver’s seat, windows and door.

K. Sirichai was rushed to Vachira Phuket Hospital, where doctors pronounced him dead at about 10 pm.

From an initial investigation of the crime scene, police believe the shooting was carried out by two assassins on a motorbike, though they, as yet, have no witnesses to confirm this.

“It must have been a difficult hit given the location and traffic conditions in the area,” Col Arayapan said.

After being hit, the victim lost control of the vehicle, which was heading toward Patong Hill after turning left from Soi Bangtong. It collided with a minivan heading towards Phuket City that came to stop in front of a row of shophouses.

The number and extent of other injuries has not yet been reported.

Police noted that the victim’s female business partner was shot in an assassination attempt at Soi Kathu Waterfall two months ago, but survived.

Yesterday’s victim, acquitted by Petchburi Provincial Court of charges of raping a minor many years ago, had no criminal convictions, Col Arayapan said.

Phuket Provincial Police Commander Maj Gen Apirak Hongthong arrived to inspect the scene at about 8 pm, while there were still many curious onlookers.

PM in urgent meeting with Army and Police chiefs