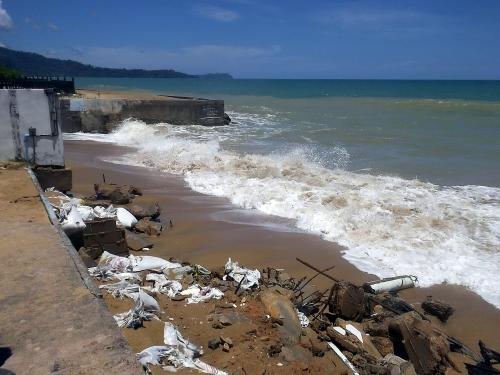 The coastal erosion has forced at least one hotel owner to set up sandbags to protect against the sea and prompted the local mayor to call for help from the Phang Nga Governor.

“Hotels in the area were damaged and a wall on the beachfront was destroyed by very high seas,” said Sawat Tankeng, the mayor of Khukkhak Municipality, who went to inspect the damage on Tuesday.

“Local hotel owners had to set up sandbags to protect their property from the waves,” he said, “and they are complaining that the beach disappeared.”

“There is no beachfront for tourists because the waves eroded the shoreline,” said Chatree Laopiyasakul, the owner of Ayara Villas.

“There used to be 40 meters of sand between the land and the water, but now tourists are complaining that there is no beach to play on,” Mr Chatree said.

Shambhala Khaolak Resort owner Varunee Khomkla also complained that the beach in front of her hotel had disappeared.

“We had to bring in sandbags to protect our resort,” she said.

Mayor Sawat said that he had reported the problem to the governor, and is now awaiting a reply as to what assistance may be provided.