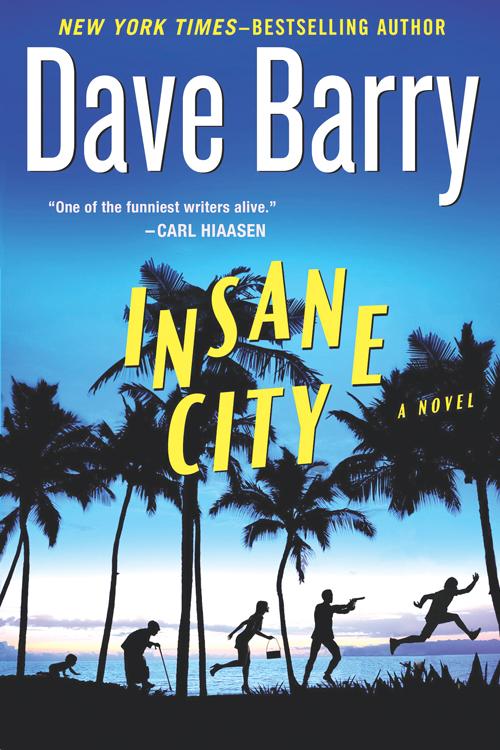 PHUKET: After a career of nearly 20 years as a demented humor columnist for the Miami Herald, Dave Barry has turned to writing comic novels. Insane City (CP Putnam’s Sons, New York, 2013, 341pp) is his third. He dedicates it to “the people of this truly insane city of Miami, for making this book easy. Without you, this book wouldn’t exist; any errors in it are strictly your fault.”

Seth Weinstein is a schlub with a dead-end job who has lucked into a marriage engagement with the beautiful and idealistic Tina Clark. Her fabulously wealthy parents “viewed Seth as unworthy to house-sit their pets, let alone marry their daughter”. Why does she love him?

“You make me laugh.”

“So does Danny DeVito.”

Tina and her mother have been preparing for a year for her perfect wedding in Miami. Flying down from Washington two days before are the Groom Posse – Seth and his three loser friends. No sooner are they out of the Miami Airport they are chugging margarita pitchers at an outdoor bar presided over by DJ Boonga Wooga and his coffin-sized speakers. They are joined by Cyndi Gonzalez “who had finished fourth in the ‘Miss Hot Amateur Bod competition’ and who was wearing a dress made from roughly one square inch of some extremely stretchy material” and her friend Duane, a large bald man draped with “an eleven-foot Burmese albino python named Blossom”.

Seth gets drunk and curls up asleep under the bar only to awake to find his friends gone. He takes a cab, with the assistance of Cyndi and Duane, to his reserved suite at the Ritz-Carlton Hotel on Key Biscayne. Only then does he realize that he’s left his suitcase back at the bar. Inside the suitcase is Tina’s priceless diamond wedding ring. Duane is dispatched to retrieve the suitcase.

Seth and Cyndi find the suite already occupied by a giant African-America stripper named LeDawne who wants her $200 fee. Seth calls his ‘Groom Posse’ who are stranded penniless outside a Russian clip joint. Seth wanders off to find an ATM machine, collapses on the beach and wakes up in time to rescue from drowning Laurette, a Haitian refugee, along with her toddler son and infant daughter. He takes the trio up to his suite where he meets Wilson, LeDawne’s even bigger boyfriend, who, for a fee, lends Seth his Cadillac Escalade so that he can pick up his posse and his parents at the airport. The doddering Sid and Rose Weinstein are waiting with their suitcases “in a violently pink hue, like large radioactive wads of bubble gum, purchased from Sears during the Carter Administration”. Inside is a healthy supply of medical marijuana brownies sent by their daughter in California.

Duane, meanwhile, has picked up Seth’s suitcase but has been called away on a medical emergency involving another python and has left the suitcase under a tarpaulin at a private zoo in the Everglades known as Primate Encounter. Cyndi and Seth leave the hotel again to fetch the suitcase but there’s another complication: a 250-pound orangutan named Trevor. He has pulled the tarpaulin and suitcase into his cage. Ripping apart the suitcase, he finds the wedding ring and decides he likes the smell of it.

Meanwhile, back at the Ritz Carlton, the guests at the wedding rehearsal dinner run amok on the medical brownies. Laurette and her two children are kidnapped by two goons employed by Tina’s father, Brewer and Castronovo, known as “the Tinker Bells, in recognition of the magical power they had to enable people to fly, at least for brief periods”. Tina, while officially an idealist about illegal immigrants, doesn’t want them around to spoil her wedding.

Seth and Cyndi don’t know this as they set out for Primate Encounters and their horrific meeting with Trevor. This sets the stage for a wild car and boat chase through Miami and environs involving an apparent armed robbery of a 7-Eleven and an ape assault upon three security guards and the nose of Brewer.

Like a cherry atop this tall whipped cream of a novel, there is a surprise ending.

Dave Barry’s novel, ‘Insane City’ is available for the kindle from Amazon priced at US$11.99 by clicking here, or by order through all good bookshops in Phuket.

Phuket Gardening: Running the gamut from A to A