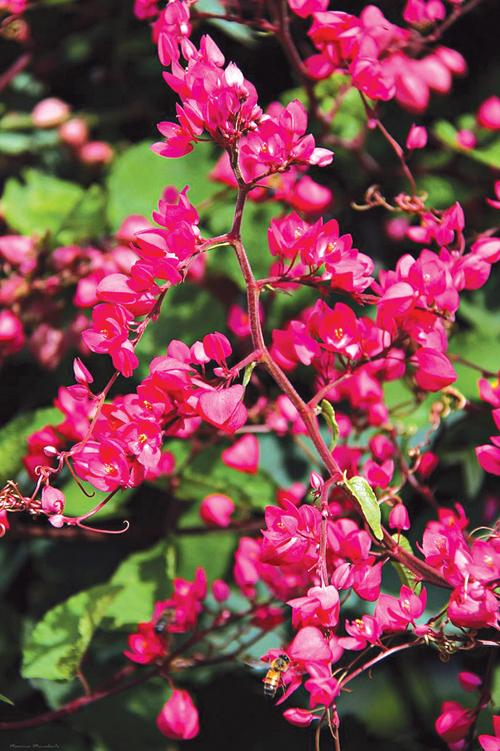 PHUKET: When I hit upon the not so original idea of listing an ABC of tropical plants suitable for Phuket’s gardens, I accepted the fact that there would inevitably be some overlap with previous articles. Just a different kind of taxonomy. But what I hadn’t bargained for was the sheer volume of relevant plants.

Uamporn Veesommia’s cryptically named “Plant Materials in Thailand”, the ultimate reference work on the subject has – including cultivars – no fewer than 1320 entries and the letter A alone has nearly 120 photographs of listed specimens. Of course, many are unsuitable for your average garden – forest trees, rarely seen or temperamental hybrids and so on, but the range is still impressive.

Some are therefore going to get only a brief mention, others none at all. The acid test, as always, will be – is it suitable for your Phuket garden?”

In the last ABC of plants, prominence was given to the varieties of allamanda (yellow cathartica) and dusky pink blanchetti, to popular annuals and to acalypha wilkesiana (red cat’s tail). I did not include the large genus of acacias, or the giant alocasia whose enormous spade-shaped leaves are such a feature of marshy woodland everywhere in Phuket. Or the most popular of all foliage shade plants, the aglaonema, which is now displayed in nurseries in shades ranging from silver and green to mottled pink.

Aglaia odorata is a bushy shrub, up to two meters tall and also known as the Chinese rice or perfume plant. A relative rarity here, I have a slow growing specimen in a large pot. With small globose and scented yellow flowers and glossy green foliage, it is a rewarding but temperamental shrub. Perhaps it is best used alone as a specimen plant. The adenium (desert rose or chuan chom) has received frequent treatment in these columns – after all, the fleshy trunked shrub has something of a cult following amongst Thai gardeners – and makes an ideal container plant for a sunny aspect.

Among climbers, two hardy souls merit special mention. One, the coral vine (antigonum leptopus or phuang chomphu) is a sturdy evergreen climber which needs no support, since it uses tendrils to attach itself to surfaces. With its masses of tiny deep pink flowers (one name is “hearts on a chain”) it will quickly cover areas of bare wall or trellis and will tolerate dry conditions. Naturalized in parts of the island, it is a good choice for the inexperienced gardener. So too argyreia nervosa (in Thailand pak rabaat), a variety of morning glory which also spreads rapidly and produces attractive large trumpet-shaped pink blooms after the manner of its kind. Another easy vine to cultivate and readily available both in the wild and in nurseries.

Among small trees, the many varieties of acacia (know in Oz as wattles or in Thailand as kratin) are invaluable additions to any garden; smallish trees with masses of showy and perfumed yellow flowers, often produced in dense clusters or racemes. Most have neat, feathery, evergreen leaves and will thrive in dry conditions. An American garden book in my possession lists more than thirty species. They can be readily pruned; remove the lead shoot and the plant will grow as a shrub.

Certainly an alpha choice. And one more manageable than alstonia is known for some reason as the devil tree. A quick grower, I have one in my garden which, after five years, is already too large for its surroundings. But it has attractive, umbrella shaped leaves, provides ample shade, and is often used in Phuket along avenues where less hardy trees would struggle to survive.

This article appears in the current (May 11-17, 2013) issue of the hard-copy Phuket Gazette newspaper, now on sale at newsstands throughout the island. Digital subscribers may download the full newspaper, this week and every week, by clicking here.

Phuket On The Menu: The Art of food