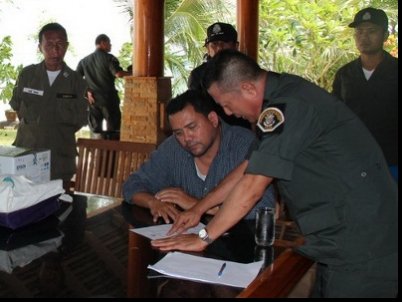 PHUKET: Following the July 31 high-profile raid on a resort under construction on Rang Noi Island, off Phuket’s east coast, the Natural Resources and Environmental Crime Suppression Unit (NREC) has pressed charges against the developers for encroaching onto protected forest land.

Kan Krao Company and Bridge Rang Noi Company were both charged yesterday with “possession [of] forest [land] without permission”.

Superintendent of NREC Region 5, Pol Col Watcharin Pusit, told the Gazette today, “At the expiry of the seven-day deadline, neither company had presented to us any documentary evidence to support the validity of Chanote title deed covering the 15 rai of land in question.

“Aerial photographic mapping from the Courts of Justice prove that four rai had been encroached on. Part of a swimming pool and building sit on that land,” he said.

“The charge against the two companies is that, contrary to the Forestry Act of 1941, they have ‘misappropriated’ about four rai of forest land that is not included in the Chanote’,” explained Col Watcharin.

“The owners will now be invited to acknowledge the charge,” he added.