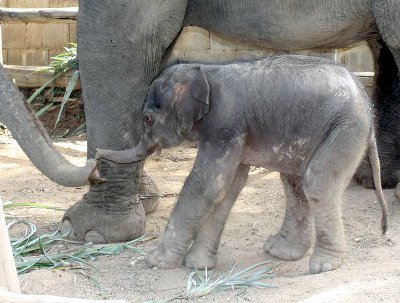 PHUKET: The DNA test results expected to determine the legality of three baby elephants seized from camps in Phuket were expected to be announced in the first week of June, but have yet to be released confirmed the Regional Natural Resources and Environment Crime Suppression Division.

On May 31, Watcharin Phusit, the superintendent of the regional Natural Resources and Environment Crime Suppression Division, told the Phuket Gazette, “We were informed by the general inspector that the results of the DNA tests will be revealed next week.”

Today, however, more than two months after the expected announcement, Col Watcharin told the Gazette that he was still waiting on the DNA results.

Col Watcharin had previously told the Gazette that he “had no idea” what was causing the delay.

Today, he explained that his department had made a request for the DNA testing to be transferred to a private operator to expedite the process.

However, the request was denied “to avoid any discrepancies arising between the tests”, he said.

Previously, Col Watcharin told the Gazette that, “Anyone found guilty in the case will get up to four years in jail, a 40,000-baht fine, or both, in accordance with the Wildlife Preservation and Protection Act.”