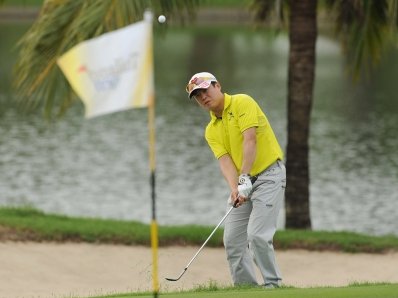 PHUKET: Korean Kim Hyung-tae and Japan’s Yasunori Yoshida made the most of near-perfect conditions yesterday to shoot eight under 64s and share a one-stroke lead after the opening round of the Thailand Open at Suwan Golf & Country Club.

The winner of the Open will receive US $1 million in prize money.

Early-starter Kim laid down a marker with nine birdies and a bogey to hold the clubhouse lead until late in the afternoon when Yoshida closed with five birdies in six holes to match his score.

Defending champion Andre Stolz, who won last year en route to clinching the OneAsia Order of Merit title, remains in the hunt after firing a two-under 70 around the immaculate 7,077 yard (6,471 meter) course, on the western outskirts of the Thai capital, Bangkok.

Joint-leader Kim, 35, whose best result on OneAsia was runner-up in the Luxehills Chengdu Open in 2010 following a play-off with Liang, credited a small swing change two weeks ago for a big improvement in his performance.

“I wasn’t happy with my swing, so I decided to make a few changes,” Kim said after his round. “It was just a slight change to the plane, so now I am getting more of a draw which gives me more distance.”

He said the extra length allowed him to attack the pins with shorter irons, leaving him more birdie opportunities.

“I didn’t use a coach for the change,” he said. “It was a feeling I had, and the first time I tried it on the course two weeks ago it worked well. This is the second time and it is still working well.”

Yoshida, 30, still searching for his first professional win and struggling for regular starts on the Japan Tour, missed only one green in regulation all day.

“My driving was very good and my approach play perfect,” he said. “This is only the second time I have been in Thailand, but I like it.”

Yoshida said the unfamiliarity of leading a tournament would have no effect on his mental state.

“Absolutely no pressure,” he said. “I have not been here before, so there is nothing to worry about. I will sleep well.”

The Thailand Open, the fifth stop on the OneAsia schedule, has seen only two Thai winners in its history despite the Kingdom producing some of the region’s best golfers, and it was left to 18-year-old amateur Natipong to fly the flag yesterday with a brilliant 65.

“Its my home course but I’m still surprised I played so well,” said Natipong, who won a team gold and individual silver medal at the SEA Games in Indonesia last year. My best round here before today was a 67.”

Prom Meesawat, whose father Suthep was in 1991 the first Thai to lift the title, remains well in the hunt after closing with a 66.

“I am happy with the way I played,” said the man known locally as the “big dolphin” because of his size.

“I had one bad shot when I hit in the water, but the wind took it a bit, so I am not too upset.”

Prayad Marksaeng, runner-up last year and considered one of the best bets for a home victory, withdrew before the start because of an elbow injury that has plagued him all week.

Yesterday also saw a return to form of left-hander Cullen, winner of the season-opening Enjoy Jakarta Indonesia Open, following the disappointment of missing the cut for the 2012 Open Championship in Britain last month.

Disappointed and ruing what might have been, that near-miss was all put in perspective as he saw Adam Scott squander a four-shot lead with four holes to play and gifted the Claret Jug to South African Ernie Els.

“I was a little bit angry for a couple of days because the course really should have suited me,” said Cullen.

“But then seeing Adam Scott, and what happened there, and how he handled himself afterwards, I couldn’t really be too disappointed. He lost a lot more and was still really good about it, so that actually got me over it and I forgot about it from then.”