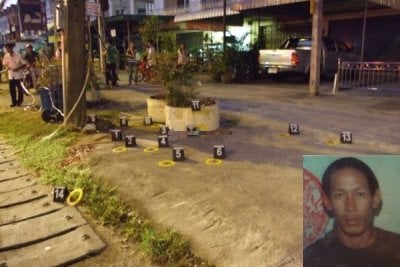 WICHIT, PHUKET: Police have launched a manhunt for a killer after a local reporter was found riddled with bullets in Phuket this morning.

The bloodied body of Somchai Kuamsap, 37, was discovered by the side of Chao Fa East Road outside Seemum Market around 4am.

Police found a slip in his wallet indicating Mr Somchai, a reporter at a local Korean language newspaper, was due to appear as a defendant in a robbery case later this month. He was also carrying a knife.

Mr Somchai’s body was face down on the sidewalk. There was a 9mm bullet and 14 casings scattered nearby.

He had been shot 14 times, mostly in the head.

His identity card showed he lived on Soi Samakkee off Yaowarat Road in Phuket Town.

Witnesses told police a man in a black T-shirt got out of a bronze Isuzu pickup near the scene before shooting Mr Somchai repeatedly and driving off in the direction of Phuket Town.

Col Wanchai said it did not look like a professional hit as the number of bullets fired suggested it was done in anger.

Phuket City Police are coordinating with all stations in Phuket to check known cases and killers in connection with the shooting, he said.

Police are investigating a number of possible motives including personal revenge, a business dispute and a love triangle.