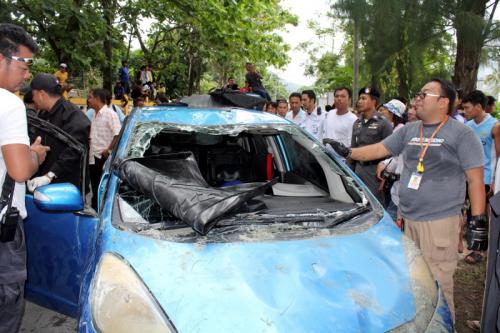 PHUKET: Relatives of a woman found dead in her car in an old tin mining pond on Monday believe she was murdered, but police do not agree.

Wattana Itthisan, the 27-year-old owner of Fasai Minimart in Chalong, was found in her submerged car in an old tin mining pond behind Chalong Temple on Monday morning.

“The driver’s window was open and the gear had been shifted into the park position. Mrs Wattana’s body was found in the back seat,” Chalong Police Capt Thada Sodarak said.

“The family believes these elements indicate foul play, but we do not agree,” he said.

“We believe that the impact from the crash into the water threw Mrs Wattana to the back seat, after which she lost consciousness and died,” he said. “We also believe that she put the car in park as the vehicle crashed into the pond,” Capt Thada said.

None of Mrs Wattana’s jewelry – a gold necklace and two gold rings – was missing and she still had her cell phone with her, Capt Thada said.

Mrs Wattana had gone to the Rong-Tium Pub near Chalong Circle with two friends Saturday night at about 9pm.

A witness told the police that when she left the pub, she was drunk, said Chalong Police Superintendent Krittapas Det-intarasorn.

She dropped her friends off at their house about 200 meters from the pond at about 5am. CCTV in the area recorded her car driving in the direction of the pond at 5:15am. Her friends received a missed call from Mrs Wattana at 5:27am.

When she didn’t return home, her husband, Pinit Itthisan, 39, started calling relatives. Together they spent Sunday looking for her, said Capt Thada.

They couldn’t find her, but they noticed tyre tracks leading into the pond and became suspicious that they were from Mrs Wattana’s car.

After midnight on Monday morning, Mr Pinit reported his wife missing and told police about the tyre tracks.

Kusoldharm Foundation rescue divers searched the mine until about 3:30am but were unable to locate the car. They returned the next morning with marine police and after about an hour of searching found Mrs Wattana’s blue Honda Jazz about 100 meters from the shore at a depth of about 10 meters, said Capt Thada.

“The car was found flipped over in the pond. The windshield was broken and the front of the car was full of mud,” he said.

The car was pulled to shore by a crane and Mrs Wattana’s body was retrieved.

“Cause of death will be determined at Vachira Phuket Hospital,” Capt Thada said. “We are working on questioning more people and collecting more evidence.”