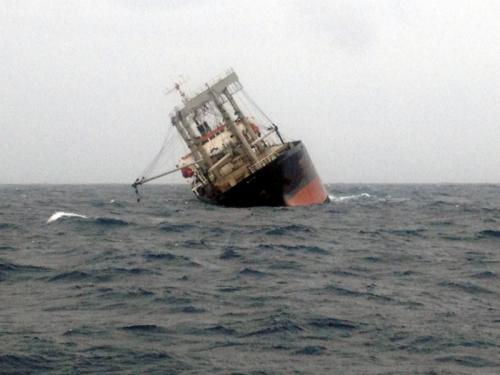 PHUKET: The Bangladeshi cargo ship MV Hope, which capsized in heavy seas south of Phuket on Thursday night (story here), is expected to arrive at Langkawi, Malaysia, today after being under tow from its position south of Racha Noi Island overnight.

The news came as local fishermen reported seeing four bodies in life jackets off Koh Rok, off the coast of Krabi, south of Phuket.

“After we called off our search mission yesterday [story here], we received a report from a fishing boat that four bodies were spotted near Koh Rok yesterday afternoon,” Capt Thammawat Malaisukkarin, Director of the Naval Civil Affairs, confirmed to the Phuket Gazette.

The Koh Rok Islands (map here), a popular day-trip destination for tourist snorkellers and divers, are located about 100 kilometers southeast of Phuket.

“The crew said the bodies they saw were wearing life jackets, but they did not recover them because they were afraid they would become involved in a crime that had been committed,” he explained.

However, the Navy will not be dispatching any ships or aircraft to recover the four bodies.

“We will not be dispatching a search and rescue team. If we did, by the time we reached the site, the wind and current could have moved the bodies far from where they were last seen,” Capt Thammawat said.

“The line is open 24 hours. We will contact the Marine Police or the local Marine Office so they can make the appropriate arrangements,” he said.

Nine of the 17 people on board the MV Hope were rescued during the four-day search for survivors (story here).

The two bodies recovered during the search and rescue efforts on Friday (story here) have yet to be identified, staff at Vachira Phuket Hospital this morning confirmed to the Gazette.

“It should be there by now,” he said.

“The Royal Thai Navy will not be involved in any further efforts involving the MV Hope as it is now out of Thai waters,” Capt Thammawat added.