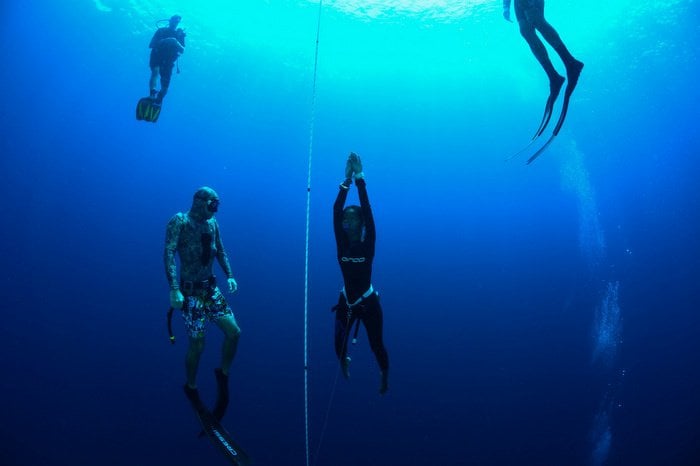 “Among the competitors, we had a few known faces who had competed in Phuket before and some competitors who were completely new to competitive freediving,” said Association Internationale pour le Developpement de l’Apne (AIDA) judge Richard Wonka of Phuket’s We Freedive.

A dozen national records were set during the competition. Photo: James Hoyland

We Freedive intern, Fahud Faiz, 34, has caught the most attention after setting three Maldives national records during the event. Fahud set the records in static apnea (3:18min), and dynamic with fins 69 meters and 46m. Since doing so, he has found himself in his homeland’s spotlight with even members of parliament congratulating him.

“It means a lot to me to be the first freediver [from the Maldives] to set three national records and give hope for other Maldivian freedivers to go ahead and perform well in this sport,” Fahud told the Phuket Gazette after being featured in national news back home.

“Maldives is a country which is highly proud of our oceans. Our way of living depends on our oceans, so any sport which relates to the ocean is always big news in the Maldives, plus freedive is growing among the youth there.”

Fahud admits to having made some rookie mistakes in his debut competition, but is still happy with the results.

“I would like to thank We Freedive center, also Richard and Sara for the professional and quality education and training provided by them to prepare me for the tournament. Andaman Freedive Challenge 2015 has opened the doors for me to competitive freediving. They will be seeing a lot more of me in the coming years,” he said.

A dozen national records were set during the competition. Photo: James Hoyland

Also setting a record at the event was Azam Hamid, who set Malaysian records during the We Freedive Suunto series in Phuket. At the Andaman Freediving Challenge, Azam set his previous default record in constant weight with a 50m dive. Additionally, Nora Galgoczy set the free immersion female record for Hungary with a dive to 20m.

But at the end of the event it was the Malaysians, Azua and Azam, who took home top prizes for their efforts in the Dive Supply and Suunto sponsored event. Each received a D4i Suunto dive computer.

“The atmosphere was fantastic. It was very relaxed, with people helping each other out all the time, which happens a lot in freediving competitions,” said Richard.

“Organization went very well, we had no safety issues whatsoever, a few non-white cards, but nothing serious. It all worked really well.”