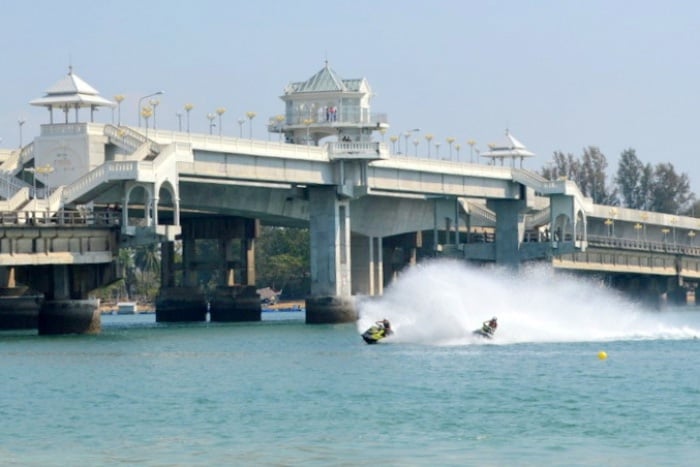 PHUKET: The opening round of the G-Shock Pro Tour 2015, the premier jet-ski competition in Thailand, will be held off the Sarasin Bridge at the northern tip of Phuket on March 28-29.

Mr Chaowalit competed in the Asian Beach Games held in Phuket last year, but only managed to rank seventh in the Runabout Open division. Instead, fellow Thai Chok-Uthit Molee won gold in that competition (click here).

“We arranged to host this competition to support the sport of jet-ski racing in Thailand and to promote tourism,” Governor Prayoon explained.

“Jet-ski as a sport is popular among Thais, as well as tourists. Therefore, by arranging this competition, we can provide an event for the benefit of both of them.”

Competition rounds will be held from 8am to 4pm, with the base of operations at Tha Noon in Phang Nga, on the north side of the channel that separates Phuket from the mainland.

“The racing will be broadcast live on the TrueVisions cable network and on the public Thai Channel 3,” Gov Prayoon said.

“Everyone is invited to come and watch the competition – free of charge.”