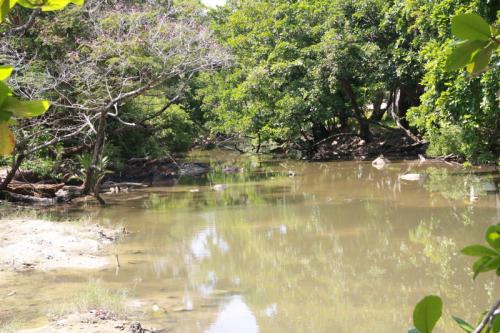 PHUKET: The Rawai municipality was assigned to take charge of the mounting trash-disposal issues on Koh Racha Yai despite progressive local government talks yesterday with hotel and resort representatives about a conglomerate of environmental issues facing the once pristine island.

“Though hotel and resort representatives agreed to take care of the trash-disposal problem themselves, I have assigned the Rawai Municipality to step in,” said Phuket Vice Governor Sommai Prijasilpa who visited the island as a follow-up to her promises in May 2012 to tackle the environmental issues plaguing the island (story here).

“I’ve asked the municipality to take charge because I am concerned the hotels and the resorts will just use on-site landfills, which might cause further groundwater problems,” V/Gov Sommai said.

V/Gov Sommai visit yesterday came in the wake of a meeting on February 4 in which Racha representative Santi Chandi asked again for the government to solve ongoing problems related to wastewater, trash disposal and beach encroachment (see story).

During her inspection, V/G Sommai was accompanied by officials from the Office of Natural Resources and Environment, Rawai Municipality, the Marine Office and the Marine and Coastal Resources for Conservation Center.

In addition to tackling the rubbish disposal issues, V/Gov Sommai looked at a number of hotels and resorts that are allegedly failing to properly treat wastewater. Resorts that do have established wastewater ponds had been accused by locals of improper maintenance, as the wastewater allegedly overflows the the ponds during heavy rains

“Many of the hotels and resorts on the island still do not have wastewater treatment systems, so I have assigned the Office of Natural Resources and Environment Phuket office to investigate the current situation and ensure that proper wastewater treatment practices are implemented before the water is released into the sea,” she said.

In response to allegations that one of the resorts on the island had encroached beyond just the beach and into the ocean, the Vice Governor assigned the Marine Office to “examine hotel and resort buildings and to demolish any facilities found to be encroaching into the water”.

Another issue brought up in the meeting on February 4 by Mr Santi was “helmet diving” for non-divers. He alleged that Chinese and Korean companies were depriving local dive shops and longtail boat owners of business by providing helmet diving services.

V/Gov Sommai expressed concern that this method of diving could damage coral reefs and called for a stop to the practice.

“The Phuket Provincial Office will issue an official announcement on the type of diving activities allowed at Koh Racha Yai, in accordance with the regulations of the Ministry of Natural Resources and Environment,” she said.