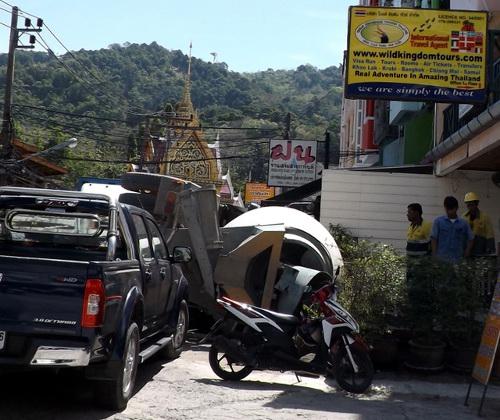 PHUKET: An out of control cement truck flipped at the bottom of Patong Hill last night, skidding on its side into a motorbike and two houses before coming to a halt about 50 meters away from Wat Suawan Kiriwong Patong on Phra Baramee Road (map here).

No one was seriously injured.

“It was about 1am last night, and I was asleep when it happened. I heard a very loud sound – I thought lightening had hit my house,” Jarun Cherngchaichana, the owner of one of the damaged houses, told the Phuket Gazette this morning.

“The driver said he could not brake because of the curve, so the truck flipped,” Mr Jarun said.

Mr Jarun filed a complaint with the Patong Police last night and is expecting a staffer from his insurance company to evaluate the amount of damage later today.

“The driver and I will settle the problem at the police station this afternoon,” he added.